Ryan Reynolds has been happily occupying the position of highly attractive, dreamboat for some time now and a video of him having a laid back chat with 10-year-old Faith has done nothing to damage that reputation. The footage has emerged after he has admitted to thinking about starting a family with wife Blake Lively. Just imagine that child!

Video footage of Ryan Reynolds being impossibly cute with a little 10-year-old interviewer has gone viral.

The YouTube clip shows the Hollywood A-Lister having a laid back chat with youngster Faith King.

Appearing on the red carpet for his new animated flick Turbo he stopped to answer her questions.

Obviously intimidated by the occasion Faith stares up at the actor who tries to put her at ease immediately.

He says to her: “How are you doing? Do you have a question, or do we want to just hang out? Should we do some crisp high-fives and call it a day?”

Remembering her question she asks him what character trait he wished he had more of.

He responded: “"I think we can all use a little more patience. I get a little impatient sometimes and I wish I didn't. I really need to be more patient.

“That's something I gotta work on. I'm not just kidding around here – I'm being serious."

Finishing up with a hard hitting question Faith then asked him what his favourite onscreen snack is.

Ryan Reynolds teams up with wife Blake Lively as face of L’Oréal Paris!

He congratulated the budding reporter when she had finished with multiple high-fives, telling her: “Good job”.

Speaking after the interview Faith described Ryan as "very funny and really tall."

Recently Ryan told Access Hollywood: "I think you do a lot of personal healing when you're parenting a child. I mean, it's a difficult job. We all know it's one of the hardest jobs in the world.

"So, I think you could kind of help heal some of the past stuff from your childhood as well as, you know, that's the gift that keeps on giving, having children. That's an amazing experience."

Having married his wife Blake Lively last year it seems the 36-year-old is ready to settle down, especially after spending so much time with his young relatives.

He added: "I have an army of nieces and nephews, so they go crazy for this stuff [toys from his animated film].

"I just finished The Croods this year as well, and so those toys are all over our house still. My dog is obsessed with one in particular, so I have to get more."

Sounds like it won't be long until 25-year-old Blake adds herself to the list of Hollywood yummy mummies. 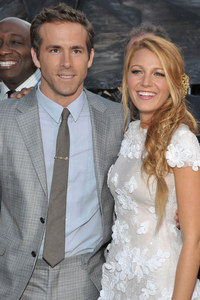 What kind of dad do you think Ryan will make? Tweet us @sofeminineuk

by the editorial team
+
All the news about Ryan Reynolds