DJ and singer Huey Morgan smashed a mug and stormed off Never Mind the Buzzcocks last night in apparent annoyance with guest hosts, Jordan Stephens and Harley Alexander-Sule AKA Rizzle Kicks. The Fun Lovin' Criminals frontman seems to grow increasingly impatient during the show before standing up and smashing his mug on the desk, causing his teammates to jump in alarm. Phil Jupitus didn't look happy, and if he's not happy, neither are we!

It's a truth universally acknowledged that if you agree to appear on the music panel show Never Mind the Buzzcocks, both you and your career are going to be mocked and ridiculed.

Any celebrity appearing on the panel need the ability to​ laugh at themselves. Needless to say, Huey Morgan was not amused and stormed off, but not before dramatically smashing a mug on the desk to make a point.

The Fun Lovin’ Criminals frontman appeared to lose his temper during the Next Line round, where the hosts give the team a line from a song and ask them for the next line.

Huey becomes increasingly infuriated by the hosts, stating: “I thought you guys would actually do something different for a change, not give me my own lyrics over and over.”

The duo light-heartedly tried to placate Huey, telling him: “It’s part of the game Huey! It’s kind of funny it’s like ‘look it’s your own lyrics’ then you forget them…”

They then tried to continue the round, which Huey interrupts by spontaneously standing up and smashing a mug against the table, leaving his teammates Phil Jupitus and Laura Whitmore jumping in their seats as the audience gasped.

In reaction Jordan said: “Huey it’s the game bro! I say a line you sing the other line. It’s just the show you don’t have to smash a mug in my hair!”

Huey then sat in silence as the other team took their turn, with Noel Fielding brilliantly taking the lead in absolutely ripping into him by tentatively pushing his mug over gently then taking all of the mugs off his table saying: “that’s enough now, that’s enough!”

As Rizzle Kicks announced the winners, Huey stormed off the set.

Don't judge @HueyMorgan too harshly. He paid the #NMTB mug's medical bills and it's making a great recovery. pic.twitter.com/zsvCQSXwZl

This isn’t the first time that contestants have been pushed over the edge on the panel show that is notorious for ridiculing its guests.

In 2009, Preston from The Ordinary Boys famously walked off after Simon Amstell read extracts from his then-wife Chantelle Houghton’s biography.

When will these celebs learn not to take themselves so seriously? 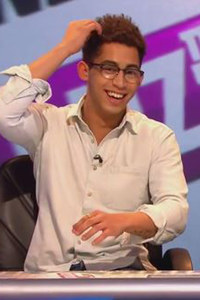