WATCH: Justin Timberlake helps a fan propose to his girlfriend during his concert

You don’t have to say, what you did, Justin Timberlake. We already know. We found out from YouTube! Justin Timberlake is not only a fantastic singer, fairly good actor (let’s not go nuts – he’s alright) and generally a suave, suave man, he’s also the nicest guy! The Holy Grail singer, who is happily married himself to the stunning Jessica Biel, helped a fan get down on one knee to his girlfriend at his concert last night. Needless to say, she said yes!

Justin Timberlake’s fans cried a river of joy last night as he helped an audience member propose to his girlfriend at his concert.

JT, who has always been a total babe when it comes to his fans and has previously attended a Marine Corps Ball when a fan invited him along, as well as featured 150 of his fans in a commercial for Target, helped out the happy couple during his 20/20 Experience tour in Louisville, Kentucky. 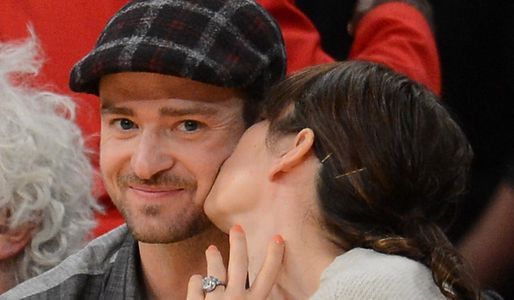 The 32-year-old played dumb as he asked the couple’s name and invited them up to the stage as the thousands of fans cheered them on.

Justin said: “Guys, say hello to Josh! Who do you have with you?...This is Josh and Kim. Why don’t ya’ll make your way over here.”

The fan, Josh, clearly loved it and waved in response to the cheers, whilst Kim looked utterly bemused – poor girl! Well, she won’t be poor for long – since Josh is about to make an honest woman of her!
​
The Take Back the Night singer, who seemed to be very much enjoying his role as Cupid, said: “Come on Kim, say hello to Louisville! Josh called me earlier. He has something he wants to tell you.”

You thought the screams were loud when Josh gets down on one knee, but as his new fiancé nods and smiles then they kiss – the crowd goes wild, as does Justin, who is grinning and clapping delightedly.

​We are so envious – proposals in front of a crowd who scream ballistically as you kiss?

All you needed was Justin singing Mirrors in the background and it would have been a scene straight out of a bad rom com!

Apparently Josh had arranged it all a month earlier – we’re wondering how he got hold of Justin and whether he’d be willing to give us his number?!

​It seems that Justin is doing more than enough for his fans at the moment though, since he’s next jetting to Atlanta, Georgia and then Orlando, Florida for the next step of his tour.

You’re a good man Justin, and we’ve always said it!

What would be your ideal proposal, and would it involve Justin Timberlake? Tweet us @sofeminineUK

by the editorial team
+
All the news about Justin Timberlake