There’s a LOT packed into the explosive one and a half minute trailer for season nine of Keeping Up With The Kardashians. The latest series of the immensely popular reality show promises to show Kris and Bruce Jenner’s split, Kanye West making a rare appearance on the show to propose to Kim Kardashian, and Khloe and Lamar fighting to save their marriage. We can’t wait to watch it!

Fans of Keeping Up With The Kardashians have been on the edge of their seats with excitement over the latest season of the reality TV show.

Season nine promises to show all of the family drama from the past few months, including Kris and Bruce Jenner announcing their split to the family.

Momager Kris Jenner is shown telling her upset children that her and husband Bruce "are better off as friends," but it doesn’t look like the news is taken particularly well…

But in happier news, Kanye West will be popping up as the new season promises to show his incredibly dramatic stadium proposal to Kim Kardashian, despite the fact that the rapper has previously said he will not feature on the show.

There doesn’t seem to be much of Kim and Kanye’s newborn daughter North West in the trailer, so we’re not entirely sure if she’ll be making her reality TV debut on the show just yet, but our fingers are still crossed! 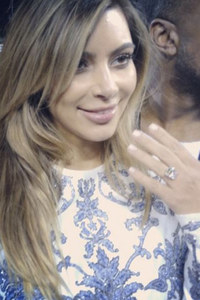 Meanwhile viewers will also be able to get an inside look at the breakdown of Lamar Odom and Khloe Kardashian’s four-year marriage, after his drunk driving arrest and allegations of cheating and drug use.

Khloe confesses she’s been in hiding because of the drama, confessing to her sister Kourtney: “I have major anxiety. I have to move on with my life, and that means changing a lot."

It’s clearly going to be an emotional storyline for the new series, as the disgraced basketball player begs the family: “I would do anything to be accepted back by you guys. You guys are all I’ve got.”

But will Lamar and Khloe be able to save their marriage? And will the Kardashian/Jenner clan accept Bruce and Kris’ split? And just how EXCITED are you to see Kanye’s proposal to Kim?

We can’t wait! Are you looking forward to season nine of Keeping Up With The Kardashians? Tweet us @sofeminineUK!