So what did you think to the season three premiere of Sherlock last night? Was Sherlock’s fall from the roof an adequate explanation for you, or were you furious by the slightly ambiguous and unreliable testimonial that Sherlock tells Anderson? Either way, Sherlock is officially back, and we couldn’t be happier – so now the-how-did-he-jump mystery has sort of been resolved, let’s move on and speculate about episode two The Sign of Three, shall we?

In series three episode one of the immensely popular BBC series Sherlock, the title character’s (Benedict Cumberbatch) fall off the roof was (more or less) explained, he patched things up with his best friend John Watson (Martin Freeman) and the devoted fans of the show exploded on Twitter with their delight with the episode.

We were also introduced to a new love interest for John – Mary Morsten, played by Freeman’s real life wife Amanda Abbington, and she was wonderful. It looks like the events of the next episode The Sign of Three will be centre of John and Mary’s wedding day, and Sherlock will inevitably mess it up!

It begins with Mrs Hudson – who was trending on Twitter last night presumably due to her fangirl attitude to Sherlock and Watson’s relationship – saying to Sherlock: “So it’s the big day then!”

The detective who is fairly socially impaired replies with: “What big day?”

The scene then switches to a concerned – and for good reason – Molly, who notes that Sherlock is a terrible idea for a best man, asking in a fearing voice: “What if John asks Sherlock to be his best man?”

It is a scary thought. Then Lestrade goes and confirms something horrendous will happen by replying: “What’s the worse thing that could happen?”

Do you think he’s on about the wedding rings, or something more sinister? It does look like John’s wedding will not go without a hitch, especially when Sherlock includes murder in his bumbling best man speech.

Cut to John and Mary running around in full wedding attire and John shouts: “There’s a man in there about to die. The game is on. Solve it!”

So it sounds like a man is being murdered at the wedding? Do you think this has anything to do with the thugs that tried to roast John on a bonfire in the last episode? Tweet us @sofeminineUK 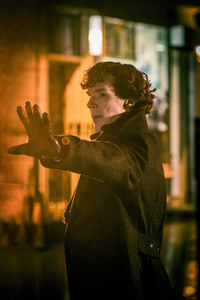