What NOT To Do During An Oscars Acceptance Speech

by Emmy Griffiths Published on 5 March 2014 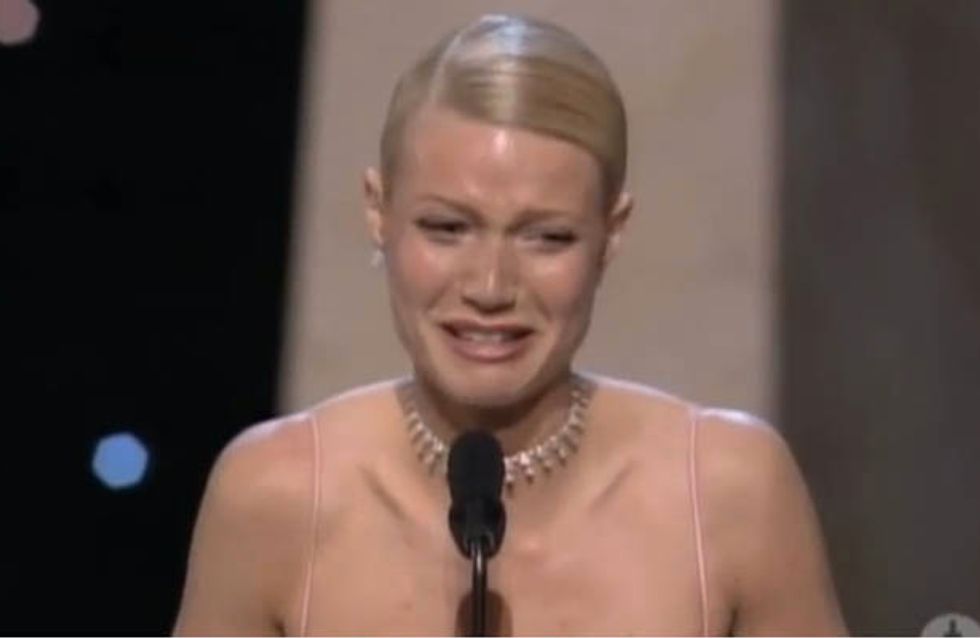 Fabulously talented and beautiful people gather in a room once a year to celebrate each other’s talent and beauty. Most of the time the winners accept with grace, humour and gratitude and walk away to thunderous applause. Unfortunately though, some winners walk away to bemused applause. Or embarrassed applause. Or simply booing.

Don't give in to hysteria - Gwyneth Paltrow

WOW, hey hysteria! Gwyneth Paltrow was a huge bundle of emotion as she accepted her Oscar, and got really high pitched and emotional more than once. We think her mother’s slightly bemused face as she sobs out her thanks says it all! If you haven't watched this before, make time for it. It's got to make history for being the most cringeworthy speech of ALL TIME.

Future Oscar winners learned so much from Angelina Jolie’s win. Namely they learned NOT to overplay their relationships with their siblings. Things got really creepy there for a moment. We mean she really went overboard which how much she loves her brother. Wow.

Did you know that Hollywood were directly responsible for awareness for AIDs and the Civil Rights movement? According to George Clooney they were anyway! Although this was extremely self-indulgent of Hollywood and annoying for the rest of us, you can’t stay annoyed at his face for too long!

Don't proclaim yourself the king of the world - James Cameron

James Cameron was so pumped winning this award! His final line “I’M THE KING OF THE WORLD” is so cringey cringe cringe. Cringe. Can someone please sail the Titanic into his pedestal?

Don't be negative about your trade - Nicholas Cage

Nicholas Cage is such an enigma isn’t he? Sometimes he’s great, sometimes he’s just terrible. Terrible. His speech wasn’t too bad, but he was very sarcastic about the movie business! Walking on thin ice here Nick!

Don't be a no-show - Marlon Brando

Does it count as being Marlon Brando if he didn’t show up? Shashine Littlefeather, president of the National Native American affirmative image committee, goes to the podium in his place, basically to pass on the message that the Academy can shove their award and stop being such dicks to native Americans. Needless to say, it was awkward.

CALM DOWN WOMAN. IT’S JUST AN OSCAR. We thought Gwyneth Paltrow was bad, but at least she was able to speak!

YOU LIKE ME. YOU LIKE ME! Who said actors needed reassurance ALL THE FREAKING TIME? We suppose winning an Oscar is definitely one way to get it!

Don't use the award to flout your political agenda - Michael Moore

Michael Moore couldn’t have turned the audience against him more. We wouldn’t have been surprised if they started lobbing scrunched up paper at him. But we suppose that you’d never have a platform of that magnitude to express your political opinion again. Still…is it the best place to be doing it, really?

We don’t want to display any favouritism, but this is how a good speech should be done!

We love you Kate! Which do you think was the worst speech? Tweet us @sofeminineUK