by Emmy Griffiths Published on 21 March 2014
© Pinterest via mystical-illusions.tumblr.com

After a 35-year hiatus, the fabulous Kate Bush will be playing a series of shows in London. Since her last tour was in 1979, we couldn’t be more excited for the return of Kate’s unique musical surrealism – there hasn’t been anyone like her since! Here’s why we will definitely be attending one of her 15 London dates…

She's a huge influence to our other favourite artists

Artists including Bjork, Kate Nash, PJ Harvey and Tori Amos were all influenced by Kate, as were Radio and Patrick Wolf. Her work has been covered by Futureheads with Hounds of Love, and Placebo with Running Up That Hill. Also, we think it's fair to say that Florence Welch definitely channels Kate Bush to some degree. We owe it to Kate to head to her concert to thank her for her musical influence! More importantly, we owe it to ourselves!

After Wuthering Heights was released, her label EMI wanted her to become a pop princess but she absolutely refused. She does pretty much whatever the hell she wants, and so if she wants to dance around through the trees in a red dress or release albums 13 years apart, she CAN dammit! She is still signed with EMI, but now they know who's boss!

We get to see her mad dancing skills

If we were to describe Kate's dancing, we'd say she moves like a rhythmic ethereal pre-Raphaelite princess fairy.

​Yes, that sounds about right.

Kate Bush wrote and sang Wuthering Heights when she was only 18, and it obviously became a number 1 hit and remains her biggest-selling single. The song is based on the novel of the same name, and Kate Bush even shares her birthday with the author, Emily Bronte. Creepy! Either way, this song is the ultimate guilty pleasure.

Did anyone else practice her dance in front of their mirror for hours at a time?

It will basically be musical theatre

Kate isn’t just a singer, she’s a storyteller, and in every song she embodies the character singing the song rather than deriving her songwriting from personal experience. For example, Babooshka is about a wife’s desire to test her husband’s loyalty, and Kate wears a veil in the music video to show her role as the bitter wife.

Since Kate’s live tour was such a long time ago, we’re dying to have the chance to see her. It’s like Charlie and the Chocolate Factory when Willy Wonka closes the factory for twenty years and everyone is desperate to find a golden ticket so they can see what he’s been up to all this time. What has Kate been doing with herself since 1979 and how do we get a ticket to find out?!

Great, now we want to see Kate Bush even more and we want chocolate.

She is NOT into the celebrity lifestyle

You won't find Kate on Twitter or Facebook, nor will you catch a glimpse of her in any interviews (we're guessing she's refused a slot on Graham Norton's sofa). Kate Bush is not in the slightest bit interested in fame, so unless you live in Oxfordshire or Devon and stake out her houses with a pair of binoculars, you're not likely to catch a glimpse of the mysterious girl unless you see her in concert. What does this tell us? We have to see her in concert, obviously.

Will she perform every single one? Will we make T-shirts with her face on it? We hope so and definitely yes.

We’re ready to ugly-cry to her more emotional songs

It’s no secret that Kate Bush’s songs, though beautiful, can be pretty depressing, and we’re ready to erupt into collective sobbing when she performs songs like This Woman’s Work. Trust us, don’t watch the clip without a tissue to hand!

Seriously, you shouldn't need anymore reason than that! She is just amazing!

Are you going to be watching Kate Bush's new tour? Tweet us @sofeminineUK 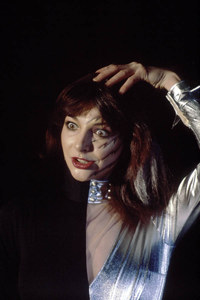