It looks like Justin Bieber has been sending Selena Gomez raunchy pictures in an effort to pull her back in, which soon ended in an argument as, weirdly, Selena was able to resist Justin's sleazy charms and told him she wasn’t interested in getting back together with him and he needed rehab. Ouch! The Biebs doesn’t react well to Selena’s lack of interest, and quickly gets abusive, especially when Selena hints that he has cheated on her.

Text messages between Justin Bieber and his ex-girlfriend Selena Gomez have been leaked.

The texts, which RadarOnline have verified as real, begin with the Baby singer trying to win back an obviously annoyed Selena and ending with the two arguing about Justin’s drug problems and how he needs to go to rehab. Woah, you tell him Selena!

According the RadarOnline the texts were forwarded by a phone registered to the Come and Get It singer’s stepfather, Brian Teefey, to one of her friends.

We always wondered whether Justin was as big of a douche to his friends as he seemed, and apparently he is, as he soon turns on Selena when she refuses his advances, which included him sending graphic nude snaps of himself.

Initially, the Baby singer wrote: “Baby come on. I love you” to which Selena furiously responded: “I don’t buy that bulls*** anymore. I was honest with you and I gave you a second chance…All my friends were right. You’re such an a**.” 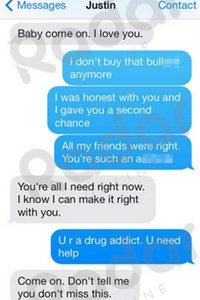 Justin Bieber replied like he was copy and pasting his own song lyrics: “You’re all I need right now. I know I can make it right with you.”

Can someone check if that’s actually a line from a song?! Selena responded curtly, quickly getting to the point. She said: “U r a drug addict. U need help.”

The Biebster then allegedly sent her a graphic nude snap with the caption: “Come on. Don’t tell me you don’t miss this.”

However, things soon turned sour when it was made clear that the 21-year-old wasn’t going to play along, and Justin immediately went on the defensive.

Wow. Miss Gomez came back with: “Good!!! Go “retire” or whatever bulls*** attention ur trying to get.”

The Boyfriend singer replied: “Can’t hear you over my cash, babe! You’re only famous cuz of me. You know it. I know. Everybody knows. Bye.”

Apparently Bieber's representatives have denied that the texts are real, whilst Selena's reps have remained interestingly silent.

Do you think the text messages are legit? Tweet us @sofeminineUK