12 British Made Cheeses You'd Be A FOOL Not To Love

by Maria Bell Published on 23 September 2014 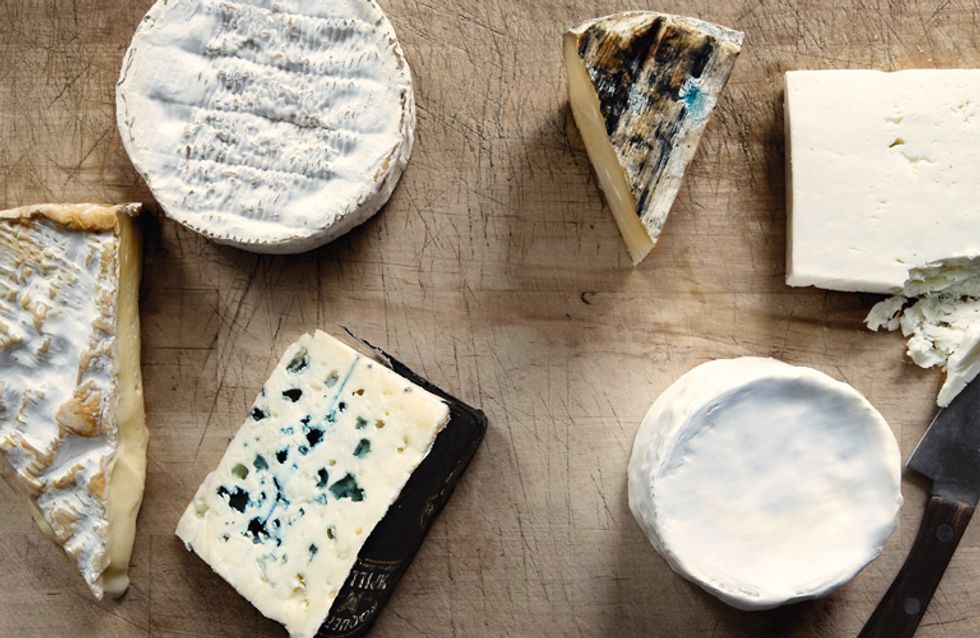 Time for some tough love. Boxed Baked Camemberts are not the be all and end of cheese. There are actually loads of slightly obscure British-based cheeses that aren't being given the credit they deserve by us and quite frankly, it's an outrage. So to put things right, we spoke to The British Cheese Board to get their opinion of 12 of the best British Cheeses any cheese-junkie needs to try.

Cheese lovers, get ready to salivate all over your screen, cos in a bid to get the most out of this relationship, we spoke to cheese expert (what a job) Nigel White of The British Cheese Board to get his expert opinion on the British born cheeses you need to try.
​
​The man has over FORTY years experience working in the dairy industry so knows a thing or two. ​Things like this fun cheese fact: Contrary to popular opinion, the second biggest produced cheese in the UK is actually Mozzarella NOT Cheddar. Who knew?!

We also painstakingly tasted all 12 of his recommendations ourselves to make sure they are indeed, the best. So while no-one and I mean no-one gets between me and my Camembert, I can hold my hands up and say these cheeses really are fantastic.

Feel even slightly the same? Understand just how good these cheeses are and bookmark this list immediately.

If there was a way to marry this cheese, we'd go for it. It might be a big claim but the perfect crumbly texture, creamy taste and fully packed flavour makes this cheese the best we've tasted in years. The aftertaste is out of this world. It's a cheesegasm for your tastebuds. And it's available in Lidl of all places!

If you like your cheddar mature, then you need to start stockpiling this beauty stat. Matured for over 20 months, this cheese has more flavour per gram than you could ever imagine. Nigel says the strong taste and the creamy texture makes this cheese the perfect ingredient for toasties. We're right behind him.

Keen's Cheddar is actually a Protected Designation Of Origin, meaning that it can only be produced in Cornwall, Devon, Somerset or Dorset from local milk. You can't get more British than that.

The texture of this cheddar is more chewy than crumbly with a slightly sweet, creamy taste. Just. Stunning.

As you can only name a cheese 'stilton' if it's (you guessed it) made IN Stilton, France, the 'Shropshire Blue' originated as an attempt from the Scots to produce the same delicious cheese but here in the UK.

​While there may be no trace of the word 'stilton' in it's name, there's PLENTY of that distinctive flavour wrapped up in a Shropshire Blue. And if you're going for aesthetics, the orangey hue that comes from a natural ingredient called Annatto makes this cheese a total winner for a cheeseboard.

The Cornish Yarg is a pretty unique cheese and ranked in the top 5 for our national favourites. The nettles used to cover the outside (yep nettles) give it a distinctive fresh, creamy taste while keeping the cheese moist and crumbly in the centre. With a name this good, you have to love it.

Blue Stilton just happens to be one of our all-time favourite types of stiltons and is honoured with a trademark and Protected Status Of Origin Status. It's as fancy as it sounds.

​The taste is smooth, soft but with a kick that you won't be able to resist.​ But not only does it taste absolutely incredible but there are only 5 dairies in the world which is allowed to make this particular type of cheese so you know you're getting something special.

This cheese is a little unusual but well worth a try. Although the cheese itself is moist, when you eat it, it leaves your mouth feeling dry - but that's not a bad thing. With a crumbly texture and a good, fresh flavour it will be a welcome addition to any cheese board.

The St Giles is a little different to the majority of the cheeses here. Like most it has a rich, creamy flavour but the St Giles is actually a semi-soft cheese, which basically means it's a British version of the French Port Salut. In other words, if that's your bag, it'll be so moreish you'll find it hard not to gorge the entire thing...

Like the perfect pair of jeans, a good brie is worth hanging on to, which is why you need to get down to the shop and buy some Somerset Brie.

Sussex Charmer is everything a good cheese should be. Rich, creamy, FULL of flavour with an added bonus of an Parmesan zing. We love it.

If you've got a thing for Red Leicester then you'll LOVE this cheese. Sweet, nutty and mild, it's a total classic.

Who needs grapes on the side of your cheeseboard when you can cut out the middle man and stuff a Wensleydale full of cranberries? It shouldn't work, but it really does.

As hungry as we are right now? Tweet us @sofeminineUK with your British cheese suggestions.

16 Delicious (And Disgusting) Ways To Eat A Cadbury's Creme Egg