This Baby Grow Is Causing Outrage Among Parents For Trivialising Rape

by Lareese Craig Published on 3 July 2017 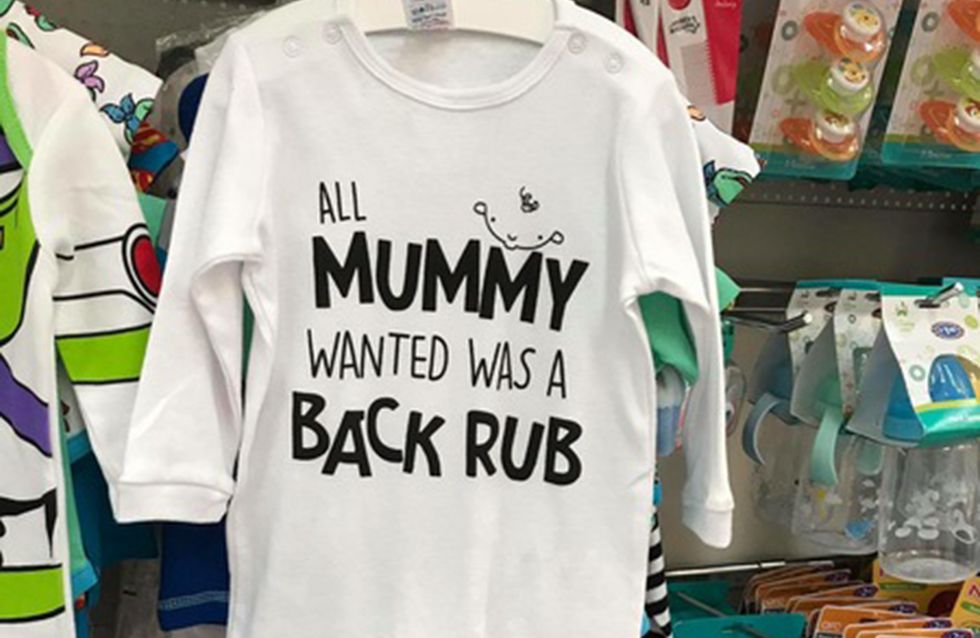 Mums and dads are spoilt for choice when it comes to buying clothes for their little ones, so we're struggling to see how there was even a gap in the market for this questionable apparel. The inappropriate baby grow on sale at B&M Bargains is ruffling plenty of feathers in the parenting world thanks to one user who shared the image on a Mumsnet forum and we can't say we're surprised...

Discount store B&M Bargains sells everything from wedding day essentials to food and is known for being a cost-effective retailer parents can (usually) rely on. But now, they're coming under fire for selling a rather questionable and offensive baby grow.

One parent spotted the 'disgusting' item of clothing placed next to other products aimed at babies and young children and chose to post an image of it on the Mumsnet forum.

The white baby grow is emblazoned with a black slogan which reads: "All mummy wanted was a back rub." Sharing it online, Jared123 asked the other forum users if she was being 'unreasonable' for finding this item of clothing 'awful'.

And as you can imagine, things escalated pretty quickly with parent after parent wading in to slam the offensive message. One user claimed: "If mummy did not want sex then was she raped. This trivialises rape and that is never okay. How are these things allowed to exist?"

​Other users were quick to agree, branding the baby grow 'gross' and 'crass' and some went on to share other equally outrageous items of baby clothing they'd spotted.

And it's not the first time we've seen inappropriate children's clothes hit the headlines in recent times. Just last week ASDA faced backlash after they printed a swimming costume featuring a very topless Disney princess. Due to a printing error, the Little Mermaid's shell bra was missing leaving plenty of shoppers shocked and appalled.

If You Find Hairy One Piece Swimsuits Offensive Look Away Now

Hugs
by the editorial team