Are Rochelle and Marvin Humes expecting a baby boy?

Has Marvin Humes' JLS band mate Oritsé let the cat out of the bag in an interview about his impending role as uncle? Those Humes just keep us guessing!

Marvin and heavily pregnant Rochelle Humes are expecting a new bundle of joy very soon and have been keeping the sex of the baby a secret.

But it seems Marvin's JLS band mate Oritsé Williams may have given the game away in a recent interview.

The 26-year-old had a slip of the tongue when talking about how pleased he was that he'll soon be an 'uncle' to "him".

He told OMG Yahoo: "I'm so excited to be 'uncle Oritse', I’m still thinking of all the things I want to buy for it.

"We have the JLS tour planned, he's coming on tour, we’re going to spoil him."

Quickly trying to brush over his mistake, the singer added: "Er...I didn’t say that, did I?"

Fans aren't sure what to think, as everyone was previously convinced the couple were having a girl.

Marvin and Rochelle, 24, have been spotted looking at pink baby clothes and guests at the Saturdays singer's baby shower arrived with pink balloons, so we thought we had it sussed.

People have speculated that Oritsé was intentionally trying to put people off the scent.

We're not entirely sure what the purpose of all the smoke and mirrors would be...

Marvin, 28, has told fans that he'd love to give the baby the name London - giving us no more clue as to the sex of the child.

He even got Michael Bublé in on the campaign for the "crazy name".

The Canadian singer was on side, saying it was "cool".

Guess we'll have to wait a few more weeks to find out if they're getting a mini Marvin or a mini Rochelle! 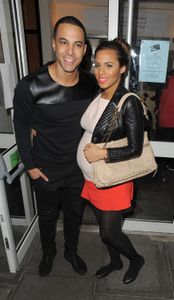 by the editorial team
+
All the news about Marvin Humes

Francesca Menato
…
BabyPregnant
From hair ideas to outifts, look no further for your daily inspiration