It's a battle of the sexes on tonight's Britain's Got Talent. It's Alesha Dixon and Amanda Holden versus Simon Cowell and David Walliams and things take a turn for the worse when the men are left judging alone. They better not get too close though - Sinitta has something to say about that!

Dance group Pop'arazzi cause quite the stir on tonight's Britain's Got Talent as the men and the women on the judging panel go head to head.

It quickly turns into a battle of the sexes when Simon Cowell and David Walliams choose not to put them through to the next round.

On the other hand, Amanda Holden and Alesha Dixon really appreciate the group's unique style and can't understand why it doesn't get the respect of the other two judges.

Amanda says: “I found it totally fascinating to watch. We’ve never had anything like it.

"In mine and Alesha’s opinion this is unique, it’s intelligent, it’s imaginative, we’ve never seen anything like it."

But the boys are having none of it and Simon soon gets rude as he starts fake snoring over Alesha's comments.

The girls end up storming off, to which Simon simply says: “See, this is the problem when you get girls who actually sort of like each other, it doesn’t work. We’ll judge the show together.

"Bring them on. I hope that this is the moment we find the winner of the show.”

Alesha is less than impressed and tells Amanda: “David wasn't saying yes just to side with Simon, grow some balls man.”

David eventually regrets the spat and says to Simon: “I’m scared. No, we have to. We have to face it, come on, like men. Come on Simon. I think the thing now is to just say sorry.”

Ever the remorseful soul, Simon tells the girls: "Go on then, say sorry."

That's not the only drama of the night; things also start hotting up when a jealous Sinitta arrives to tell David who's in charge.

With a more light hearted atmosphere, Sinitta - who once dated Simon - tells David: “This is my Simon, by the way, my Simon. Not your Simon, my Simon. Mine.”

The pair then squabble over the tight t-shirt wearing music mogul and who gets to take his coat.

Simon is, of course, loving being the centre of attention! 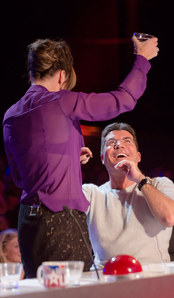 The Pride Of Britain Awards 2014 – Behind the scenes gossip

by the editorial team
+
All the news about Amanda Holden

Francesca Menato
…
Britain's Got Talent
From hair ideas to outifts, look no further for your daily inspiration