Cara Delevingne was just one of the many stars to walk the red carpet at the Cannes Film Festival last night. As always, she looked beautiful - but the model unfortunately became the victim of streaky fake tan in the pouring rain.

The gorgeous 20-year-old model wore a low-cut black lace Burberry dress, which she accessorised with some seriously blingy jewellery and messy, side-swept hair.

She completed her look with bright red lips and matching nails.

Other stars who attended the opening ceremony included The Great Gatsby stars Carey Mulligan and Leonardo DiCaprio, plus Nicole Kidman, Georgia May Jagger and Freida Pinto.

But the glamour of the night was somewhat spoilt by the lashings of rain that fell, with stars either hiding under umbrellas or facing the fact their outfit would get soaked.

Unfortunately for Cara, it seems she'd chosen to apply some fake tan before the big night to give her a glow.

But the pouring rain appeared to ruin her bronzed look, with the model instead displaying a blotchy chest because her fake tan had run.

She may be one of the world's most beautiful women, but Cara's just like you and me! 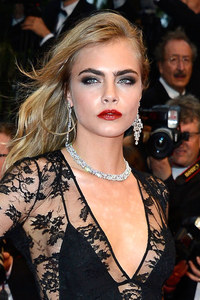 Great Gatsby star Carey Mulligan also struggled to stay glamorous in the rain - the 27-year-old wore a gorgeously understated nude dress and had even ditched her famous crop in favour of long hair.

But as she prepared to walk the red carpet, poor Carey was hit on the head by an umbrella.

Fortunately, several chivalrous men were on hand to crowd around her to ensure she was kept as dry as possible en route to the sodden red carpet.

She told the Daily Mail: "There were so many people around me as I got out of the car that I couldn't move and I got hit on the head by an umbrella.

"I suddenly went 'What the ****' and I didn't realise there was a TV camera in my face recording everything."

Nicole Kidman, though - who wore a Dior flower-print dress - wasn't bothered by the downpour.

"We complain when we don't get any. I can handle a rain shower." 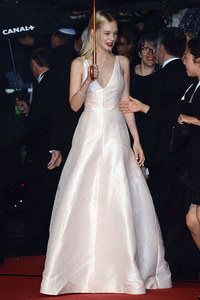 Esme Riley
…
Cannes
From hair ideas to outifts, look no further for your daily inspiration