Read-throughs for the eagerly awaited Doctor Who anniversary special have started. David Tennant is returning to join Matt Smith in the one-off episode, alongside sidekicks Billie Piper and Jenna-Louise Coleman, plus Joanna Paige and John Hurt. The stars are out in force!

Doctor Who will celebrate its 50th anniversary this year with a special episode in November.

And there are a collection of familiar faces joining current Time Lord Matt Smith for the adventure.

​Billie Piper and David Tennant are both confirmed to join the cast for the one-off show.

​The pair were originally on screen together when David played the tenth incarnation of the Doctor and Billie was his partner in crime, Rose Tyler.

​It will be the first time they've returned to their roles since they left the show in 2010.

​The exciting special will be shown in 3D as well as 2D, which has left eager Doctor Who fans hoping for an anniversary spectacular.

​Speaking about the work of writer Stephen Moffat, Matt Smith said: "What he's written is just spellbinding. It's one of the best [episodes] ever, ever, ever. There are parts of it in mad 3D. But what [Moffat's] done with the idea is really clever, it's not just throwing things at the screen.

​"He's been wanting to write this script for ever and he's really done it justice.

​The cast met recently for a read through of the special episode - and joining Matt, Billie and David was current sidekick Jenna-Louise Coleman and Gavin And Stacey favourite Joanna Page.

​It has been rumoured that this will be one of Matt's last outings as the Time Lord and he will make way for Doctor number twelve next year. 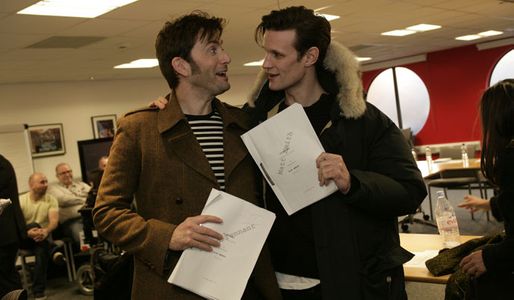 Francesca Menato
…
Doctor Who
From hair ideas to outifts, look no further for your daily inspiration