See photos of both doctors side by side! The speculation over the 50th Anniversary special of Doctor Who has been huge and it looks like we'll be seeing the current doctor Matt Smith and his predecessor David Tennant working together in their latest adventure.

Matt Smith and David Tennant have been spotted filming together in Wales for the special 50th Anniversary episode of Doctor Who.

The two actors were confirmed for the special last month, but it was unclear whether or not they would appear in scenes together.

We're not sure how they're going to explain having the 10th and the 11th Doctor side by side - but if anyone could do it, it's going to be the Time Lord.

They were photographed on Wednesday, filming at Chepstow Castle in Wales.

David and Matt were both dressed in suits each with their signature styles; Matt in a bow tie and David sporting converse.

The pair were seen shooting scenes with the TARDIS for the 3D spectacular, which is due to air in November.

David, 42, is not the only familiar face returning to the show for the one-off episode.

His sidekick during part of his stint as the Doctor between 2005 and 2010, Billie Piper, is also set to return.

The Broadchurch start spoke to the Radio Times about how pleased he was to be working with Billie, 30, again.

He said: "It is strange being back in the same suit, but it also feels very familiar and comfortable.

"There’s nothing quite like Doctor Who. It has a wonderful excitement about it. I always had happy times there.

"It’s lovely to be around Billie again, even though I see her all the time anyway."

​It has been rumoured that this will be one of 30-year-old Matt's last outings as the Time Lord and he will make way for Doctor number 12 next year. 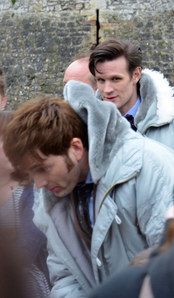