Downton Abbey Season 4 Spoilers: Series will be full of "shocks"

Downton Abbey star Joanne Froggatt has hinted at what's in store for fans of the hit ITV drama for its next season. Speaking at the Glamour Awards on Tuesday night, the blonde actress let slip just how "exciting" it's going to get.

Joanne Froggatt was pressured to reveal spoilers for the new series of Downton Abbey at Tuesday's Glamour Awards.

The pint-sized blonde took home the TV Actress prize for her role as Anna Bates in the show, but not before she dished some dirt on Julian Fellowes' period drama.

She revealed that fans have quite a "rollercoaster" in store for them when the fourth series kicks off.

Unfortunately the actors are of course sworn to secrecy - Joanne even joked that any serious plot spoilers were worth more than she is herself!

The actress said: "It's so difficult, because my lips are sealed. It's more than my life is worth."

Viewers are left wondering what direction Downton Abbey will take after one of its main characters, Matthew Crawley - played by Dan Stevens - was killed off in the Christmas special.

And the death of Lady Sybil - played by Jessica Brown Findlay - earlier in the series means fans don't know what to expect.

Asked about the departure of such important cast members, Joanne said: "Yeah, I think its ever-changing really, I think that's the nature of the show.

"I think that's a good thing, because it keeps the dynamic fresh, it keeps the storylines moving… So, yeah it's changed, but it's just as good as it's always been."

The fourth series is tipped to start with the funeral of Matthew Crawley, after photos emerged of members of the cast filming in a graveyard. 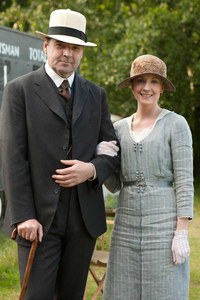