Jessica Alba was one of many celebrity mums to drop her baby weight at classic Hollywood speeds. And now we've got some answers as to how she pulled it off - and it does not sound fun.

Jessica Alba has revealed that she wore a corset day and night for three months in order to lose her baby weight.

The mother of two gave birth to her second daughter Haven in 2011 and clearly wanted to get her toned figure back as quickly as possible.

She told Net-A-Porter's digital magazine about the experience: "It was brutal; it's not for everyone. I wore a double corset day and night for three months. It was sweaty, but worth it."

Back in 2011 she told Lucky magazine: "I wear a girdle around my tummy from the moment I give birth until it doesn't feel loosely goosey anymore - that takes a good two to three months."

From Channing Tatum to Miranda Kerr: Celebrities celebrate US Mother's Day
We may already have celebrated her in the UK but across the pond yesterday was the day dedicated to mothers - and all sorts of celebs were sharing the love. Here's a round-up of some of the sweetest messages and photos on US Mother's Day.

It may sound like a simple solution, but even if you reckon you could handle the discomfort, some don't think Jessica's methods are the best.

He told Handbag.com: "Although you may appear thinner when you wear a girdle, the girdle doesn't strengthen or tone your abdominal muscles.

"Girdles just temporarily compress and redistribute fat and skin around the abdomen. When it comes to a flat stomach, diet and exercise - not undergarments - are what count."

The 31-year-old - who's also got a four-year-old daughter named Honor - may have chosen to wear a corset to drop the pounds because she's not great at balancing all the things that come with being a working mother.

She told Net-A-Porter, after she arrived late to the interview: “I don’t balance. I’m so embarrassed I was late, but I was cleaning up and trying to be a good auntie to the birthday girl and a good friend to my girlfriend.

Wearing a crippling girdle round the clock may not sound particularly good for you, but Jessica is just one of many celebs who like to promote a healthy lifestyle.

She recently became a bestselling author after her book The Honest Life hit number three on the New York Times best seller list.

The actress says the book aims to promote “a healthy, natural lifestyle - without being boring, beige or blah.” 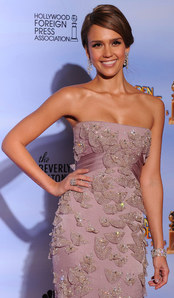