Katy Perry moves on from John Mayer with her agent?

Katy Perry hasn't got the best track record when it comes to men (ahem, John Mayer, cough, Russell Brand) and it sounds like she's taking a break from her search for love. The singer has reportedly struck up a special friendship with her agent Michael Kives.

Katy Perry has reportedly struck-up a close bond with her agent Michael Kives - but apparently it's more "sexual" than romantic.

After a tumultuous few years when it comes to men, Katy is taking a break from her quest for love and instead just having fun.

A source told US Star magazine: “Katy and Michael have been hooking up.

"They were friends first, but Katy leaned on Michael for emotional support after her break-up with John.

"It’s more of a sexual thing for her rather than a heavy-duty relationship."

Katy, 28, split from notorious player John Mayer earlier this year after an on-off relationship for months.

Many had been sceptical of Katy's choice to date the notorious heartbreaker and the couple apparently had problems at the start of their relationship because of his wandering eye.

The source added: “She is still calling John because she can’t let go. And he still reaches out to her too because he loves to string his exes along.”

Katy is apparently sick of being the one to invest too much in a relationship but this time it's Michael, 33, who wants things to get serious.

They said: “Michael is having a blast with her. He’s been bragging to all his friends about Katy, and he’s holding out hope that she will want to get serious.

"He would love for her to be The One.”

But Katy could have bigger things to worry about than love, after she landed herself in hot water with rapper Chief Keef.

The singer dissed his new song on Twitter when she posted: “Just heard a new song on the radio called ‘I hate being sober’ I now have serious doubt for the world.”

The Chief angrily responded: "“Dat b*tch Katy Perry Can Suck Skin Off Of my D*ck."

He continued: “Ill Smack The Sh*t out her,” and added: “New Song Katy Perry Coming Soon.”

Katy, 28, quickly apologised but there's no word back from the Chief. 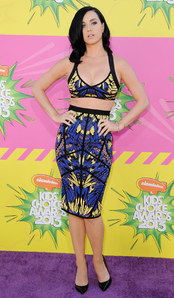