by Francesca Menato Published on 1 May 2013
© Mark Hom

The Kardashian sisters are a pretty awesome media trio but for years one of the three has dealt with particular scrutiny around her body and weight issues. Khloé Kardashian has spoken up about the pressure of being directly compared to her smaller sisters.

Khloé Kardashian has admitted that the media pressure on her to look a certain way has left her feeling "beat up" in the past.

The youngest sister of the three, Khloé has always been bigger than her sisters Kim and Kourtney, who are 5'2" and 4'9" respectively.

At around 5'10", Khloé is not quite as petite as her older siblings.

She revealed to Cosmopolitan: “I’m confident in who I am. I’ve always known that I’m not Kim and I’m not Kourtney - I’ve always been OK with that."

But when there are other forces in play - like the media - Khloé starts to lose her confidence.

She admitted: "I probably thought I was prettier before I entered the spotlight because being compared to somebody else every day does sort of beat up your spirit and soul.

"But it’s made me stronger. I’ve gained another level of confidence.”

The comparisons with her sisters were felt even more keenly as the three share their mother Kris as a manager.

Khloé, 28, claimed she was once told my her mother she was "gaining weight".

The reality star added: "But she was talking to me as a manager, like I was ruining a brand deal. It’s hard to understand that and it’s more hurtful when it’s coming from my mom, but Kim is definitely her favourite.

"It doesn’t bother me. They’re so similar - they could be the same person.”

Having such a strong media presence in her life growing up, Khloé has had to go through some very trying times - including the death of her father when she was just 19.

And while all this was going on, Khloé still felt she was being judged on the way she looked.

​She said: “I’m pretty tough. I want to say I don’t care, but of course [comments about my body] are going to sting. After my father died, I gained a lot of weight, and then I was in the spotlight.

"I was quickly criticised for not being a cookie-cutter sister like Kourtney and Kim. I lost about 30lbs before I did Kourtney And Khloé Take Miami. I was feeling so good about myself and I was still so critiqued.

"I thought, ‘Oh, my gosh, if I’m not good enough now…’ And that’s when something clicked in my brain: I have to do whatever is good for me… I feel that I’m healthier [now], but I don’t think I’m prettier thinner.”

She credits her balanced outlook to the support of her husband - NBA star, Lamar Odom.

The couple married in 2009 and his appreciation for her body has helped her learn that strict, miserable dieting just isn't necessary.

She told Cosmopolitan: “I don’t care what size I am; I care about how I look. If my jeans are tight and I have a little muffin top, then OK, I have to cut down on the carbs.

Khloé claims her relationship with her husband is pretty old-school and she's happy with it that way.

She said: “I’m very modern day when it comes to my personality and my work, but I’m very old-fashioned with my morals and values of being husband and wife.

"He will come first. It’s very taboo nowadays to support your man, but you have to do what makes you happy – even if someone else doesn’t understand.”

One of the other reasons Khloé seems to find herself in the headlines is everyone's eagerness to see her have a baby.

She has admitted that she has fertility issues herself and so won't have the ease of pregnancy her sisters have.

But she told Cosmo she's not actually in any hurry just yet: “I just wanted to be, ‘Hey, let’s have a baby,’ and we would just have one. Kourtney did. And I wish that was the way for me. But it won’t be. I’ll have to take hormones.

"I do want to have a baby, but I don’t feel the urgency to have one this very moment.”

The full interview appears in the June issue of Cosmopolitan, on sale 2nd May (also available in digital edition).​ 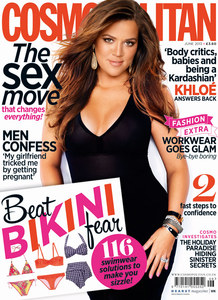