Finally, Kim Kardashian has broken her post-baby silence! We hadn’t heard from the new mum in weeks, but now she’s finally taken to Twitter and has been gushing to friends about her new role as a mother.

Kim Kardashian is loving her new role as a mum.

The Keeping Up With The Kardashians star gave birth to baby daughter North West earlier this month - and even she's surprised at how she's taken to motherhood.

Kim's close friend Robin Antin, who founded the Pussycat Dolls, has been spilling the gossip on her recent visit to Kim and boyfriend Kanye's home.

She added: "The baby is beautiful. Kim keeps telling me how much fun it is to be a mom. She and Kanye are so happy."

A source close to Kim has claimed she's breast-feeding her baby daughter, who they call Nori for short.

The insider said 32-year-old Kim "can’t believe how maternal she is on her own. Breast-feeding is working for her and she already feels she has bonded with Nori."

Kim and Kanye, 36, were reportedly offered $3.2million by an Australian magazine for a photo shoot with North, but the protective rapper immediately turned it down.

He's previously said that his daughter is not "America's baby" and is clearly keen to keep her out of the spotlight - which may be difficult with so many Kardashians around!

Kim's been silent on Twitter since Nori’s birth on 15th June, but she finally returned to the social media airwaves yesterday to wish her younger sister Khloe a happy birthday.

She posted an old photo montage of herself with 29-year-old Khloe along with the caption: "Then- @khloekardashian The birthday girl! I love you so much!!!!"

Kim then posted a collection of recent images and wrote: "Now- @khloekardashian The most loyal & supportive person on the planet! Life wouldn't be the same…" 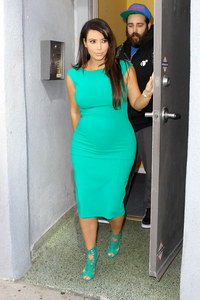