Made In Chelsea News: Spencer Matthews admits he cheated on Lucy Watson

After weeks of proving everyone wrong, the seemingly perfect match Lucy Watson and Spencer Matthews has fallen to pieces. And yes, you guessed it, it was his fault. Spencer has admitted to cheating on his latest girlfriend on a recent holiday - despite claiming that she would be the one to tame him.

Spencer Matthews has done it again. He's cheated on his girlfriend, Lucy Watson.

Remember the episode when he promised he would never cheat on her because he doesn't cheat on people he respects?

In defence of Lucy, it seems safe to say it was Spencer's incapability to stay faithful that was to blame, rather than a lack of respect.

The Made In Chelsea End Of Season Party was aired on 4od a week before it'll be shown on E4 and has revealed Spencer to be the same love rat he was at the start of series five.

In an interview with presenter Rick Edwards, he admitted: "I have tripped up, yet again."

Asked what that meant, Spencer clarified: "I cheated on her, Rick."

He went on to explain that it was very recently, when he was on holiday in Greece a few weeks ago.

Rick then echoed the thoughts of the nation when he asked: "What the f*ck is wrong with you?"

The King of Smarm then attempted one of his classic responses: "I think I'm just young, and living some form of dream, but hurting people in the process, which isn't what I wanted to do."

As if it may offer some consolation, he went on to say: "I still think if anyone could have changed me it could have been her.

"Could be her - I still love her so I'm in quite the predicament."

That's one word for it Spennie.

We then got to hear what Lucy had to say, and as promised she did not react like Spencer's pushover ex Louise Thompson.

There were no tears, and no second chances.

She explained that she had found out via a tweet from "some nice people out there looking out for [her]".

She went on to describe the situation - he denied it when she confronted him on the phone and then "managed to admit it over text - which was very brave of him."

With apparent plans to move in together, the news came as a huge shock to poor Lucy and she went on to declare to Spencer: "You're selfish, that's the problem.

"After this is finished please do not ever speak to me, ever again."

Lucy took the chance to escape London and the inevitable questions she would face, tweeting: "Can't believe the studio show is online already. Laters London."

Spencer also took to the site and posted a photo of himself sporting a cap printed with the words "I heart haters!" 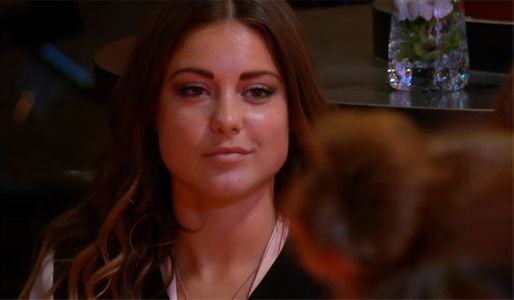