by Francesca Menato Published on 2 May 2013
© Getty

FHM has been ranking the world's sexiest women again and this year it's pint-sized beauty Mila Kunis taking home the prize. She's joined up at the top of the list by some classic choices but where's last year’s winner Tulisa Contostavlos?

Mila Kunis has been named the sexiest woman in the world by men's magazine FHM.

Flying the flag for the Brits is Helen Flanagan, who came in at a very respectable third place.

The silver medal went to a frequent favourite with men and women alike, pop sensation Rihanna.

Last year’s shock winner Tulisa Contostavlos didn't even make the top 10 this year - she slid down the list to number 11.

He said: "Not only is she naturally stunning, but she has a great sense of humour and isn’t afraid to poke fun at herself.

"The nation has spoken, and the verdict is that she is officially the perfect girlfriend."

The appreciation for Mila appears to be both multi-faceted and uncompromising.

On the FHM site they declare: "If you don’t agree, you must be some kind of terrible, cold-hearted monster. Begone, monster! Shoo!"

Helen Flanagan, 22, first found fame as Rosie Webster on Coronation Street, but has been a lads' mag favourite since appearing in little more than a bikini in I'm A Celebrity...Get Me Out Of Here!.

The curvaceous actress, who is "very proud of her boobs", is unsurprisingly very flattered by the prize of most sexy woman in the UK.

She said: "I'm absolutely thrilled to be voted the Sexiest Woman In the UK. It's a lovely confidence boost, especially when there are so many beautiful girls out there."

"Rosie Webster would definitely be impressed!"

It was a good year for the ladies of this fair isle, with 53 British girls making the top 100.

But this doesn't include the expectant Duchess of Cambridge Kate Middleton, though her sister Pippa made it to position 58.

Others in the top 100 include Corrie star Michelle Keegan at number four, The Saturdays' Mollie King at 18, Made In Chelsea star Louise Thompson at 73 and 19-year-old Little Mix singer Perrie Edwards at 55.

There were a few surprise entries, including Taylor Swift, who made it all the way to number 12 on the list!

There were also a few specific sexy-related categories up for grabs. 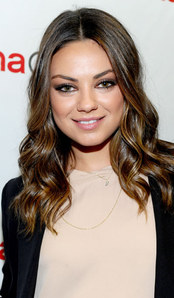