Brad Pitt and Angelia Jolie just don’t think they’ve got enough on their plates with glittering Hollywood careers, charity campaigning and six children. The engaged couple are said to be keen to have two more kids - taking the total Jolie-Pitt family count up to 10!

The Hollywood super-couple have six children already - but that's not enough.

Ange is reportedly keen to adopt a baby girl from Jordan after she visited Syrian refugees there last week.

A source told The Sun: "She has been particularly touched by the situation in Syria and wants to adopt a child from Jordan to do her bit to help.

"The publicity would help draw the world’s attention to what’s going on there."

And the couple are also said to want another biological child, with 38-year-old Ange even adapting her diet and eating a lot of potassium in the hope it'll help her fall pregnant. 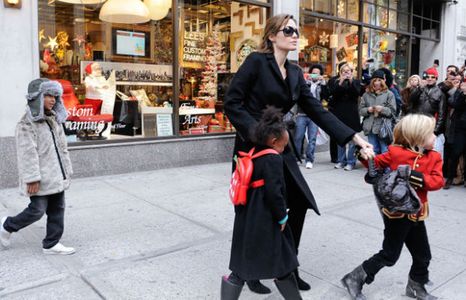 Brad and Ange are already parents to adopted kids Maddox, Pax and Zahara.

They're also biological mum and dad to daughter Shiloh, plus twins Knox and Vivienne.

The insider added: "Angie and Brad’s attitude towards kids is the more the better - and that once you have several a few more makes no difference.

"The twins are now four and Angie and Brad have agreed it’s time for more kids.

"They’re crossing their fingers that they’ll bring their next child home soon."

It's a busy year for the couple, as they're also expected to get married in 2013.

They got engaged in 2011 and have been together for eight years, so their brood is desperate to see their mum and dad become husband and wife.

Brad, 49, admitted last year: "I am getting more pressure from my kids, and it is something I want to do within their lifetime, but I also feel like the time has come.

"The time is nigh. It’s soon. I got a good feeling about it."

And plans for their big day are said to have been accelerated after Ange's recent double mastectomy trauma.

A source told MailOnlone: "Angie is keen on a wedding and the kids are clamouring for a marriage and keep asking Brad and Angie when it’s happening.

"Brad has been caught up in production turmoil with his new film World War Z, so there’s been no wedding planning as a result, but Angie has said it will happen sooner rather than later.

"They are, for all intents and purposes, married, but it’s clear that it’s important to them to make it official."

Esme Riley
…
BabyWedding
For all the best videos, memes and shareable news!