Downton Abbey star Allen Leech has opened up about his relationship, which started behind the scenes on the set of the hit period programme. The actor, who plays Tom Branson, admits he's pretty serious about make-up artist Doone Forsyth.

Allen Leech has spoken out about his very own Downton Abbey love story.

The 32-year-old, who plays Tom Branson in the hit show, met his girlfriend Doone Forsyth on the set of the ITV drama.

Doone works as the show's make-up artist and it seems love quickly blossomed while she was working on brightening Allen's blue eyes.

He said: "She is Scottish so I'm keeping the Celtic thing going. She's a make-up artist. This is going to sound wrong but she did everybody, I just stood out."

He gushed: "We've been together for a year, I think it is serious. It is going very well."

The actor also credits his love with making his eyes look so blue on camera.

Last year, when they first met, he told Twitter fans that she's "the loveliest girl in the world".

Allen was speaking at the Soho Theatre as he was interviewed by comedy characters Ronna and Beverly.

The cast of Downton have been filming the new season for at least six months and are yet to finish the series.

Joanne Froggatt was pressured to reveal spoilers for the new series of Downton Abbey at the Glamour Awards.

The pint-sized blonde took home the TV Actress prize for her role as Anna Bates in the show, but not before she dished some dirt on Julian Fellowes' period drama.

She revealed that fans have quite a "rollercoaster" in store for them when the fourth series kicks off.

Downton Abbey should return to our screens later this year. 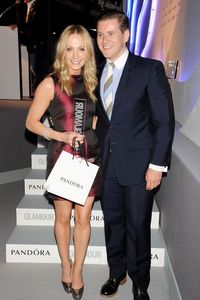 by the editorial team
+
All the news about Allen Leech