Hollywood's young super-couple have been making the most of the time they have back together since Robert Pattinson's return from the outback of Australia and last week he was spotted partying hard with Kristen Stewart at a gig in LA.

Robert Pattinson and Kristen Stewart were spotted on yet another date night as they danced the night away to Crystal Castles at their concert in Hollywood.

The couple were noticed by fans in the crowd as they partied away with their fellow music lovers.

The Hollywood Palladium only caters for around 4,000 people so the A-Listers were noticed pretty quickly.

Rob and Kristen are usually super-private and keen to keep their relationship away from public eye, but these two seem to have become more willing to pose with fans recently - KStew was happy to oblige on Friday night.

Although the Twilight star is well hidden behind her baseball cap in the fan snap, there's little doubt the wavy brown locks and scruffy white tee belong to Kristen.

Indie band Crystal Castles is known to be pretty wild on stage and their gigs can get rather sweaty, so RPatz and KStew were clearly up for a big night.

They shook hands with eager fans and posed for various photos.

The lucky Twi-hards took to Twitter to praise the couple and their gracious attitude.

One wrote: "I met Kristen Stewart at the crystal castles concert, she’s too gorgeous.”

Another posted: “Bella and Edward. Them two crazies at Hollywood Palladium!”

The pair are fans of live music, both enjoying California festival Coachella together - even if there was an awkward moment when they bumped into Rupert Sanders' ex Liberty Ross!

We're pleased to see they're back on track after their rocky patch last year, which saw Rob dump Kristen after she admitted to cheating on him with Snow White And The Huntsman director Rupert.

And she had us worried for a minute when she appeared to get into a car with her ex-fling Rupert, last week.

But friends of the actress insisted the man in the vehicle was in fact the parking valet and by the sounds of it Rob was happy with this explanation.

Phew - not sure we could have coped with another Kristen cheating scandal! 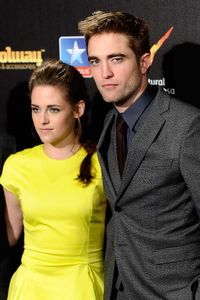