Lord Alan Sugar made his second firing of Series 9 in last night's Apprentice. This time it was Tim Stillwell who was sent home in a black cab, after he led team Evolve to failure in a task that saw contestants develop a new flavour of beer.

Food entrepreneur Tim Stillwell was the second contestant to be fired by Lord Alan Sugar in 2013's The Apprentice.

The hopefuls were challenged with developing a new flavour of beer in last night's episode, but Tim's team Evolve failed to impress.

In the boardroom, Lord Sugar labelled the team a "shambles" before telling them: "You couldn’t organise a p*** up in a brewery."

The business boss added: "I’m sitting here thinking to myself, you’re all a bloody waste of space at the moment. I mean, the basic fundamentals; counting, calculations, locations, where you going to sell. These are elementary things." 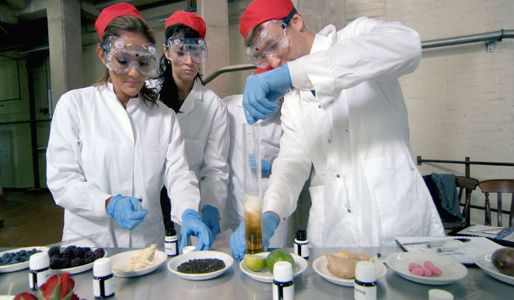 Tim was appointed Project Manager of the girls' team Evolve, who decided to create a rhubarb and caramel beer.

Endeavour - the boys' team - was led by Kurt Wilson and developed a chocolate orange beer.

While Endeavour found success selling a lot of their drink to the public, Evolve failed to flog their product at a local beer festival - which turned out to be hosted in a pub.

While the boys celebrated their second win with a trip to Belgium, Evolve sat in the losers' cafe and discussed their failed task.

Tim decided to bring Francesca MacDuff-Varley and Rebecca Slater back into the boardroom with him.

Francesca had made mistakes relating to the concentrations of the beer during the manufacturing stages of the task, while Tim blamed the issue of location on Rebecca.

But ultimately it was Tim who faced Lord Sugar's wrath after he questioned the young businessman's ability to project manage.

Lord Sugar said: "I'm wondering if you did lead the team."

He added: "Tim you have been honest and accepted responsibility you're a young man you've got a lot of enthusiasm."

But Lord Sugar went on to reveal that he had no choice but to fire him.

The business boss had appointed Tim as Team Leader and moved him over the the girls' team after he drew attention to himself at the end of the first task - something he now regrets.

Tim said: "The best thing that I've learned is that there's a time when you don't need to talk.

And he went on to admit that his firing in the boardroom was hard to take.

He added: "It's sort of like when you're having an argument with somebody and they cut you off, and even though the argument's over you still have so much to say about it.

"But usually you don't have eight cameras on you and loads of eyes, so you can calm down and think I'll just drop it.

"But I was unprepared to drop my argument with Lord Sugar."