by Francesca Menato Published on 2 May 2013
© BBC Pictures

Producers at the BBC are holding their breaths waiting for the angry responses they are expected to receive after tonight's screening of The Politician's Husband, which is set to include a horrific rape scene.

The BBC are expecting serious backlash surrounding a graphic rape scene that will air in The Politician's Husband tonight.

The second instalment of David Tennant's latest serious drama includes a 70-second scene in which his character rapes his wife.

Last week's episode ended with Aiden Hoynes - David's character - waiting up in the dark for his wife, who has just put her political gains ahead of his.

The Broadchurch actor plays a disgraced Cabinet minister who uses his wife - the newly appointed minister for Work and Pensions - to regain his position in parliament.

He is driven by his overwhelming jealousy to commit this sickening act, which appears just five minutes into the show.

The incident between Aiden and his wife Freya, played by double Oscar nominee Emily Watson, occurs when what appears to be innocent sex between man and wife turns sinister.

BBC bosses fear the timing of the screening - after the watershed at 9pm - is going to invite serious complaints.

Vivienne Pattison, director of pressure group Media Watch UK, is not impressed with the broadcasting choice to put such adult content on so early.

She said: “The Politician’s Husband will be following on from snooker.

“Snooker to sadistic sex is quite an extreme leap and care should be taken to avoid putting the most ‘challenging’ material immediately after 9pm.”

Katie Russell, of charity Rape Crisis, doesn't object to the scene's screening but insists that there should be a warning issued to viewers about the content that will follow.

She said: “It’s important that any programme planning to screen such scenes carries clear and repeated warnings to avoid triggering flashbacks or distressing and re-traumatising sexual violence survivors.”

The BBC stands by its choice and a spokesman has said: “This scene goes to the heart of the emotional story for the characters.

"It establishes that their sex lives are integral to the narrative, and while some viewers may find these scenes strong, they reflect the central themes of power and betrayal which impact on their political marriage.

“It will air in a post-watershed slot and there will be a warning prior to broadcast that the drama contains scenes of sexual violence and some strong language from the start.”

The Politician's Husband is the latest hit show with David Tennant at the helm.

Following on from the national phenomenon Broadchurch, the opening episode of the BBC's three-part-drama fetched 2.5million viewers. 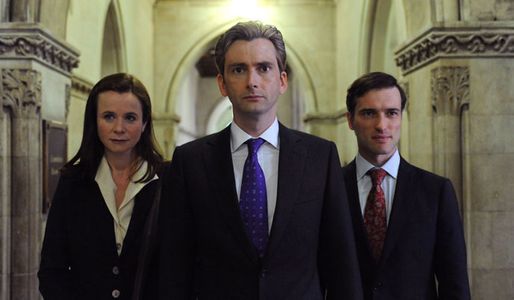