She's one of the world's most famous working mums and has made a successful transition from pop star to respected fashion designer. So how does she manage it? She spoke at The Vogue Festival this weekend about how she fits it all in.

Victoria Beckham has admitted that her hands-on approach to design extends to leaving her clothes at the door and working on her collections naked.

The glamorous mother of four uses herself as a mannequin while she gets together with her team to create new looks.

She said: "I have a great team... we sit around and talk and then I basically get naked and make clothes.

"I’m designing things I’d want to wear myself. I love women and I want to make women feel good about themselves and confident and empowered."

We're imagining those sample sizes come up pretty small if they're based around Vicky B herself!

The 39-year-old former Spice Girl spoke about the challenges she faced trying to break into such a tough, judgemental industry - even poking fun at the extensive use of botox.

She said: "There were a lot of raised eyebrows, well those who could raise their eyebrows, that I was going to design a fashion line.

This self-belief and acceptance of the nay-sayers has enabled her to build a successful business around her highly scrutinised lifestyle.

Victoria has to have pretty thick skin, as her constant frowning in photos has many people making presumptions about her.

​​She joked: "Everyone thinks I’m going to be such a cow - I get it because I think the same when I see the pictures."

So she may not be as moody as she looks, but she's certainly as busy.

She told a packed audience - including her eldest son Brooklyn, who came along to see “that mummy actually does have a job” - about the difficulties of balancing work and family.

She said: "I don’t know how I do it. It is a juggling act. It’s no different for me than any other mum.

"I get up very early and go through spelling tests and times tables tests with the kids like any working mum.

"I am also up late because I have a baby and a 14-year-old who refuses to go to bed. So I don’t get as much sleep as I would maybe like.”

Victoria - who's also mum to Romeo, Cruz and Harper - also admitted that she wouldn't be able to handle everything she's got on her plate without support from other people.

​She added: "I have great people who handle my schedule. If there’s a parents’ night or Easter bonnet parade or nativity parade I plan around that so I can be heavily involved.

"But it’s difficult juggling working, having the children, having a husband who travels. I do have a bit of help, I have a nanny, I can’t do it all myself.

"I really enjoy being a mum, I love them and I’d do anything for them. But I also love what I do. I think anyone who says it’s easy is lying."

As a working mother, Victoria was sure to build a business environment that supported others in her position.

She said she encourages other team members to bring their children to work and added: "My office is quite small and Harper had this swing. 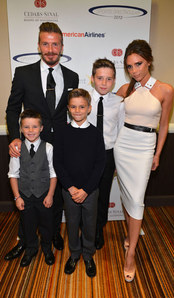