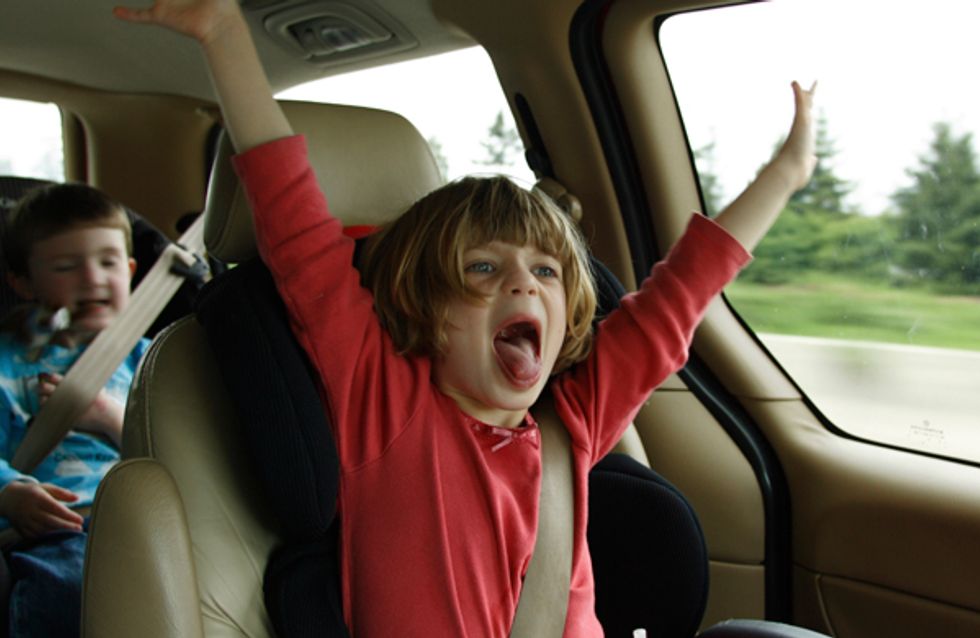 There's no point in beating around the bush: kids are amazing at being annoying. Don't think for one second that your kids are angels because they're not. Yeah, they certainly teach us about unconditional love and all that sentimental stuff. But they also prove that real life monsters often parade around in pigtails or Transformer pajamas.

2. Refusing to put on clothes

Around a certain age, kids start to hate their clothes. Sadly for parents, sweet bribes, shouting, and frustrated tears are wasted efforts in those defiant moments.

3. Always grabbing at your phone

Sticky fingers all over your £500 iPhone? HELL NO.

You've never asked your friend what she plans to do with that subtle moustache because, hey, she clearly doesn't mind it. Your kids on the other hand? Well, let's just say they aren't as polite, and now your pal goes in for upper lip waxes once a month.

5. Answering to another name

Suddenly the name you chose ain't doing it for him. Now he wants to be called PirateCaptain or Mr. Farts, and you have to play along or you'll be that cruel mum who didn't encourage her kid's imaginative spirit!

6. Being a double agent

Oh man, you wish the world could see how adorable, polite and cute your kids can be at home.

Unfortunately when they're out in public, somehow their bratty button gets pushed and they become those kids racing around the restaurant or sitting down in the middle of the zebra crossing in tears. So embarrassing!

7. Using your body as a jungle gym

They always want unending piggyback rides or randomly jump on your stomach when you're quietly reading a book. Sometimes you wanna shout, "DON'T YOU SEE I'M A HUMAN!??!"

You love 'em, but geez, it'd be awesome if they could leave you alone for just one second!

8. Needing to go #2 the second after you put them to bed

You ask your little ones over and over if they need to go the bathroom during the 30-minute bedtime routine. It's not until you turn off the light and get pumped for the private time ahead that you hear their little voices whining about having to poo.

Doesn't matter if you have 30+ years on your child and a university degree and life experience. Some kids turn into little smartasses who backtalk, mock you, and, like, kinda hurt your feelings too.

5. Turning their noses up at dinner

Apparently they don't give a sh*t that you spent three hours preparing a meal Jamie Oliver would squeal at! Nope. They spend the entire dinner picking up bits of delicious vegetables asking, "Ew, Mummy. What is this?"

Boy or girl - neither gender can properly aim and they always leave a ring of urine around the base of the toilet. YUUUCK!!!

Is the ear-piercing, dramatic screaming going to be the soundtrack to the next 18 years of your life? No, because by the time your children hit 3-years-old, you've already mastered the art of selective hearing. It's the only way to avoid going deaf by 40!

14. Not knowing how to sit still

The last thing you want to do on a long flight is apologise every 20 minutes to the passenger ahead because your kid can't stop kicking at the back of their chair!

"Oh yeah, did Tommy have an inflatable Slip-n-Slide at his birthday? Wow! Oh, Sally had Cherry Soda and mini cakes for everyone to get sugared out on? Is that so?" Ugh, please shut up.

How does your kid annoy the hell out of you? Tweet us @sofeminineUK

11 Things You Ought To Know About Attachment Parenting

The Professional, The Chiller Or The Monster: The 8 Types of Women We Turn Into When We Give Birth

15 Epic Fears That EVERY Mum Suffers From