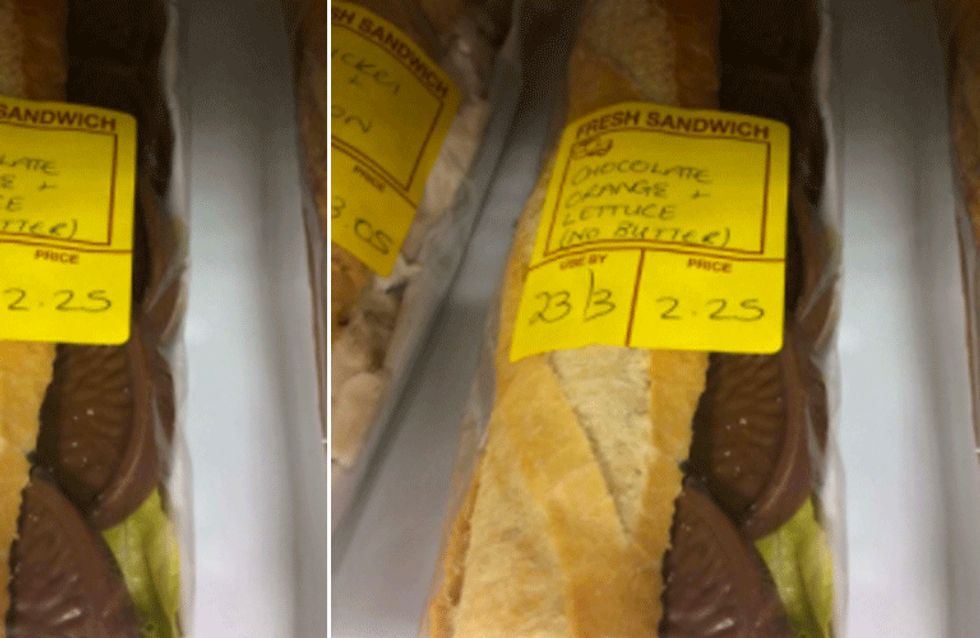 Wales is famed for many delicious delicacies: Welsh cakes, faggots etc. etc. but now they can add chocolate orange and lettuce sandwiches to that long list. We're all for updating a classic, case in point: the Beauty & The Beast re-make but is this sweet, zesty offering a filling too far?

The humble sandwich has secured itself as a firm British lunchtime favourite, ever since our dear mothers used to wrap them in clingfilm and pack them into our Care Bear lunch boxes, alongside strawberry winders. Because nothing signals your status as a proud Brit quite like a tasty sarnie.

But fast forward to today and one of the best things about adulting, as I'm sure you'll agree, is being able to choose exactly what we stick between those two slices of bread. But while the majority of us aren't particularly adventurous, one Welsh retailer has made up for what we lack in creativity with its latest addition to the menu.

Channings Newsagents at Longross Court in Cardiff are pushing all the baguette boundaries and are now stocking their shelves with super sweet sandwich fillings, including Terry's chocolate orange and lettuce as well as a Liquorice Allsorts variety. I kid you not. One Welsh sandwich fan came across the crazy snacks while scouting out his lunch and tweeted his surprise.

This is now a thing in Cardiff. Yet some people claim Wales is ready for independence. pic.twitter.com/pJYdXZYgFB

Note how they contain 'no butter' because there's nothing that could ruin a chocolate and lettuce sandwich more than a covering of the sandwich staple, right? If you fancy trying the odd sardines, its bad news for anyone outside of Wales as they're only being sold at this one newsagents whose owner Phil is the crazy sandwich-flavour inventor.

Speaking to Medium, Phil revealed the odd lunch snack is not a daily occurrence but something he magics together every now and then “just to add a bit of fun to the shelves".

Past inventive baguette fillings have included ‘Marmite & Jelly Beans’, which like the above, flew off the shelves. But even Phil himself says “they’ll never beat a ham salad”, and we're inclined to agree with him there.

Would you want to try these bizarre baguettes? Let us know @SoFeminineUK!

22 Life-Changing Recipes To Step Up Your Sandwich Game