It's Leanne's birthday and Nick's present for her hasn't turned up. So when she receives a big bunch of flowers she's touched, but Nick's adamant he didn't send them. As David jokes Leanne has a mystery admirer, Nick's uncomfortable. After finding Peter's lighter and a birthday card, his imagination runs riot. He threatens Peter - it looks like David's plan is working.

Elsewhere, Faye's gutted when Jason arrives back on the Street but her dad isn't with him. Jason tells her he's had to stay on in Newcastle and passes on a message that she should stay with Anna for a few more days.

Nick and Leanne row - she's hurt that he doesn't trust her around Peter. As Kylie consoles Nick, David realises the pain he's caused isn't going to undo what happened. Feeling hurt and angry, he decides to open up to Tina, who's shocked to hear the baby might not be his. But she's even more shocked when she hears what David plans to do.

Elsewhere, Roy opens up to Hayley and admits he feels terrible knowing his father tried to get in touch with him but died before he could reply. Hayley's frustrated Roy won't visit a doctor and decides to take action.

Also, Faye wishes she was still part of the family when she sees Anna welcoming Gary and Izzy round. 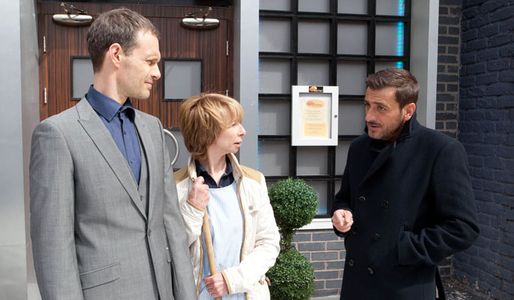