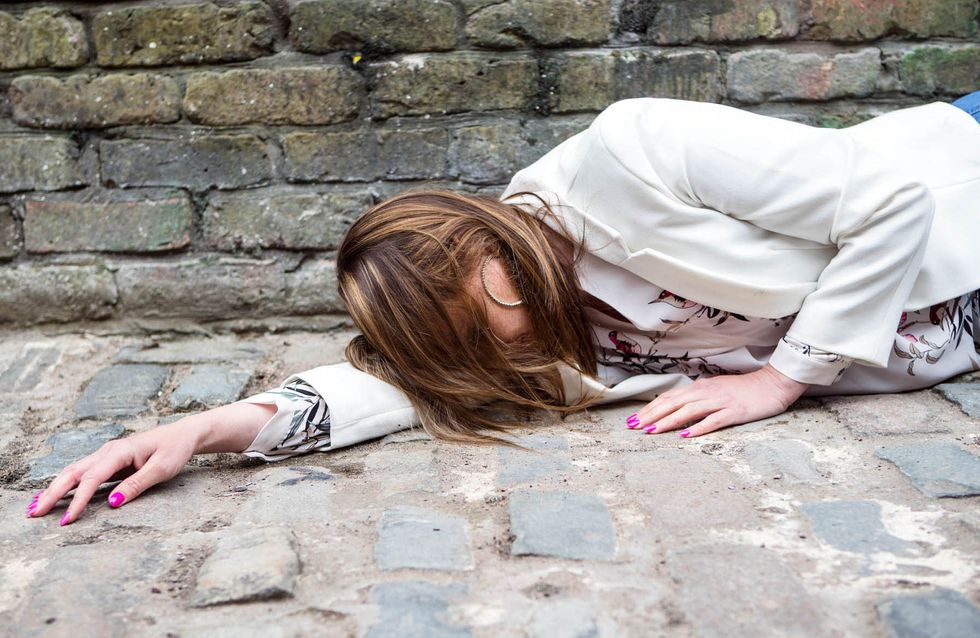 Clearly in pain, Tracy confides in Beth that she’s got an appointment with the specialist but Ken’s none the wiser. Beth insists she’ll accompany her. As Amy sets off for her violin recital, Tracy approaches and is upset to realise she knew nothing about it. Amy makes it clear she’s not welcome. Cancelling her appointment with the specialist, Tracy sets off for the recital.When Tracy arrives at the back of the hall, Amy loses concentration and rushes from the stage humiliated. In the foyer, Ken berates Tracy for failing to respect Amy’s wishes. When Tracy makes bitchy comments about Amy’s lack of talent, she’s mortified to realise Amy’s overheard. TellingEccles she’s her only friend in the world, Tracy takes her for a walk but collapses in agony in the ginnel.

In preparation for her sentencing, Izzy shows Anna and Gary the childcare rota she’s drawn up for them should she be sent to prison. Izzy drops Jake off with Anna and breaks down in tears aware she may not see him again for a long time. Gary does his best to comfort her. Overcome with emotion, Izzy kisses Gary and he kisses her back.

Sophie’s put out when Luke lets slip that Kate and Caz have been invited to Liam’s birthday party. When stressed Maria calls in the salon and announces that her cooker has broken down, Caz comes to the rescue and insists they’ll host Liam’s party. Maria’s grateful whileAudrey’s impressed at Caz’s generosity. His party in full swing, Liam accidentally causes Maria to spill a drink over Caz. With nimble swiftness, Caz moves her leg out of the way and Luke realises she’s not in any pain at all.

Phelan invites his mate over to the builder’s yard and thanks him for torching Jason’s van and tells him his plans to empty Jason’s bank account and steal his business. When Eileen calls at the yard and reveals that Jason has given her control of the business finances, Phelan does his best to mask his fury.

When Dev hands Eccles over to Beth, explaining that he found her wandering the street, concerned Beth enlists Robert’s help and they are shocked to find Tracy unconscious in the ginnel. After a phone call from Robert, Ken arrives at the hospital, blaming himself for failing to realise Tracy was ill. The doctor confirms that Tracy has a kidney infection. AsTracy regains consciousness, she admits to Beth how scared she is. When Beth explains that Robert picked her up and saved her life, Tracy’s hopes are lifted. Amy refuses to go and see Tracy. Tracy suggests to Robert they could try again but Robert’s adamant it’s over. When Tracy asks after Amy,Ken is forced to admit she refused to visit. Tracy’s devastated and vows to put things right with her daughter.

Clearly hopeful, Izzy suggests she and Gary get back together. Not wishing to dash her hopes, Gary agrees it’s a possibility. Izzy, Gary and Anna arrive at court, and Gary and Anna listen in horror as Izzy receives a two-month prison sentence. Gary admits to Anna that he and Izzy kissed and he’s worried that she’s read too much into it and got her hopes up. Izzy sits alone in a prison cell, scared and upset.

When Liam steers his remote control car into Caz’s leg, she overreacts and screams in agony. Kate rushes to her aid whilst Luke secretly reckons she’s putting it on. When Luke discovers Caz’s discarded painkiller in the sink, his suspicions are heightened. WhenLuke voices his suspicions to Sophie about Caz’s fake injury, Sophie resolves to tell Kate the truth.

When Eileen enthusiastically suggests she’ll cut back on her hours at Street Cars so she can be more hands on with the builder’s yard, Phelan can barely contain his fury.​​​ 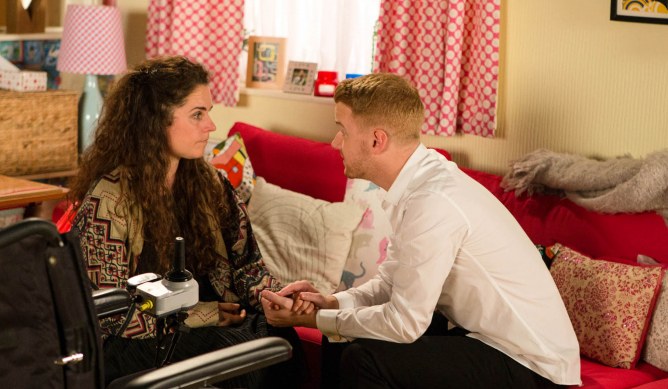