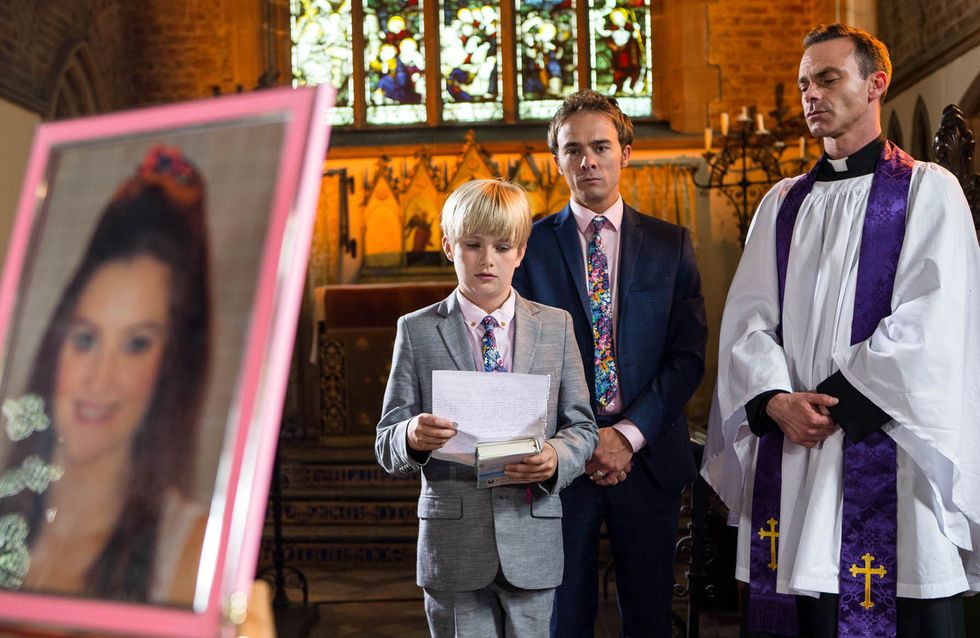 As the Platts ready themselves for Kylie’s funeral, Audrey worries that they shouldn’t have let Max dictate the music and food. When Sarah calls in the flower shop and announces she’ll be attending the funeral, Todd’s deeply concerned and points out how he’s covered up for her for months by letting Tony take the rap. Sarah’s shocked to realise Todd thinks she murdered Callum. She swears she didn’t. Realising she’s telling the truth, Todd wrongly assumes David to be the murderer. Billy conducts Kylie’s funeral and Max delivers a heartfelt eulogy. As David heads to the graveside, he’s incensed to see a wreath from Kylie’s mates at the Dog & Gun.He kicks out at it angrily and Todd pulls him back. Todd turns on David, convinced he killed Callum and warning him to watch his back.

Having taken a call from one of Jason’s mates, Eileen’s beside herself as she tells Todd that Jason’s had an accident in Thailand and she needs to fly out as soon as possible.

Billy promises Todd that once the funeral is out of the way, they’ll break the news of their relationship to Sean. As Sean helps prepare the Rovers for Kylie’s wake, Phelan calls in to tell him about Jason’s accident and how Todd has gone to the funeral leaving Eileen climbing the walls trying to find a flight. Sean promises to fetch Todd back. As Norris pores over his tablet, he explains to Rita and Tim his plans to have a clear out at home and sell his clutter online.

Todd confronts David at the graveside telling him he lied about Tony and made out he was Callum’s murderer to protect Sarah but now he knows the truth. As the pair go nose to nose Billy breaks it up and drags Todd away, pointing out it’s neither the time nor the place. As Billy consoles a distressed Todd there’s a moment of real tenderness between them which is witnessed by a shocked Sean. While the wake takes place in the Rovers, Todd andSarah follow David to No.8. Furious Todd lays into David telling him how Jason is now in a hospital bed because he believed his dad to be a murderer when all along it was David. Unable to stand it any longer, Sarah finally cracks and reveals that Callum’s killer was Kylie. Todd’s stunned. David begsTodd not to go the police about Kylie for the sake of Max and Lily but Todd refuses to make any promises.

Sean hurries away, devastated to realise Billy and Todd are now together. In the vestry, Billy tells Sean how sorry he is for the hurt he’s caused but he and Todd are very much in love. Sean heads home, heartbroken.

Macca grabs Gemma and drags her into the ginnel where he threatens to beat her up if she doesn’t retract her statement about Clayton. Suddenly Craig comes to her rescue and pulls Macca off her. Macca does a runner and Craig phones the police. Gemma thanks Craig for stepping in when he did and calls him a hero.

Having booked her flight to Thailand, Eileen confides in Phelan how worried she is about Jason. They’re interrupted by Sean, who clearly upset, explains how he’s found out that Billy andTodd are having an affair. Eileen feigns shock and hugs him while Phelan can barely disguise his contempt. When Phelan suggests that Todd is to blame for the affair and describes him as poisonous, Eileen leaps to his defence and orders Phelan to leave.​​​