Finding himself without Eva, Aidan goes to see Maria. She tells Aidan how hurt she was when he failed to show for her sentencing. Aidan apologises but can he resist temptation?

Todd confronts Shona over the stolen wallet and tells Billy she’s a common thief. But Billy remains sympathetic and insists he wants to help her. Having taken Shona to the local hostel, Billy does his best to secure her a bed for the night. But is it a case of old habits die hard for Shona?

Kevin confides in Anna that Sophie’s medical bill was much higher than expected and he’s had to dip into the garage tax account. In the Rovers, Phelan steals Kevin’s phone. He then contacts the pick-up truck suppliers and masquerading as Kevin, arranges to have the new truck delivered to a different address. Handing Kevin’s phone to Andy, Phelan tells him that his next job is to take delivery of Kevin’s new truck and steal it. Will Andy stand up to Phelan or do as he is told?

Jenny tries to talk Johnny out of his plans to retire. When Adam finds out from Peter how he once owned 50% of Underworld but gave it back in return for nothing, he forms a plan... ​​​

Meanwhile when Roy discovers from Cathy that Alex now lives in a separate flat as there isn’t room at Yasmeen’s, he feels terrible knowing he’s split up her family. As Roy shows Eric, a potential buyer round the café, Brian forms a plan to scupper the sale and enlists the help of Sally...

Toyah warns Eva to watch her back with Maria as she’s got form for stealing other people’s boyfriends. Meanwhile Aidan locks horns with Jenny in the factory. Alone, Johnny tells Aidan about Adam’s threat to take the business off them, before warning Aidan to stop messing with other women behind Eva’s back, neither of them sees Jenny enter. Later, Aidan shoves Adam up against a wall, telling him he’ll do everything within his power to stop him getting his hands on the factory. In the Rovers Aidan confides in Alya about Adam and Peter’s plans to sue them. Jenny confronts Johnny demanding to know if Aidan’s having an affair. Johnny confirms that he is but refuses to reveal who with - will Jenny put two and two together and get five?

In the café, David tells Sarah how Shona returned his wallet and even replaced his cash. Having overheard their exchange, Billy sets off on a mission. Billy tracks Shona down to the bar in town and cajoles her into coming home with him. What will Todd say about Billy’s new friend?

When Roy quizzes Sally about her knowledge of Eric, it becomes clear she knows nothing about him… is Brian’s plan about to unravel?

Phelan calls in the bistro and having shown Andy one of Steph’s bracelets, explains that he has keys to the builder’s yard flat and that unless he plays ball, anything could happen to Steph. Will Andy succumb to Phelan’s demands?​​​​ 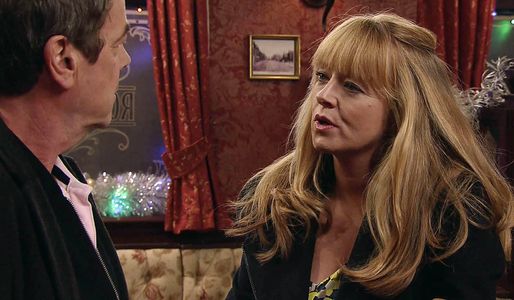