David takes Max to the doctors for his ADHD check up. Max is upset when Kylie doesn’t show up. Worried about Kylie who’s refusing to take her calls, Eva tells David she’s going to pay the Dog & Gun a visit in the hopes of finding her and reckons he should go with her. As Eva and David search the Dog & Gun for Kylie, they come face to face with Callum and Macca. David sees red and, launching himself at Callum, demands to know where his wife is.

As the teenage thugs approach the café, Yasmeen is forced to wade in and send them packing. Meanwhile Chesney wishes Roy luck as Tyrone drives him to his court hearing. Will he pay the price for his unreasonable force?

Alya admires the basque Sinead’s made for Beth and slips it into her bag to take to a wedding fair that afternoon. But when a sheepish Alya arrives back she’s forced to admit she took it and pulls out the basque, revealing a huge red wine stain on the front. Sinead’s devastated.

Luke invites Maria round for dinner. Maria plays hard to get until Audrey steps in and tells Luke she’ll go out with him if Maria won’t. Amused, will Maria let her guard down? Alya and Gary announce to Yasmeen and Kal that they’re seeing each other again. How will Alya’s family react?

David’s rage turns to devastation when Callum coolly informs him that he and Kylie are back together. Outside the Dog & Gun, David collars Macca and offers him cash to take him to Callum’s flat to find Kylie. Macca leads David and Eva to Callum’s where they lie in wait for Kylie. Impatient, David kicks in the door of the flat, searching for evidence of Kylie. But they’re disturbed when Macca returns with Callum. A menacing Callum warns David if he doesn’t stay away, he and Kylie may take Max to live with them. How will David react to Callum’s threats?

Roy returns from court feeling wretched, believing he got off lightly. He calls on Mary at the motor home but she makes it clear she’s disappointed he resorted to violence. Roy leaves, saddened.

Alya’s guilt-ridden as gutted Sinead surveys Beth’s basque. Julie suggests they use soda water to remove the stain. As the girls set about their rescue mission, Sinead puts Beth off when she asks to see her basque.

Elsewhere with Tyrone out Luke cooks for Maria at No.9. But when Tyrone arrives home early, Luke’s frustrated as he’s forced to join them for dinner. Luke hopes for another date but will Maria commit? As she prepares to leave, Erica’s pleased to learn from Leanne that Nick feels the same as her and only wanted a fling. But when a mischievous Erica declares deep feelings for him, will he realise it’s an act? 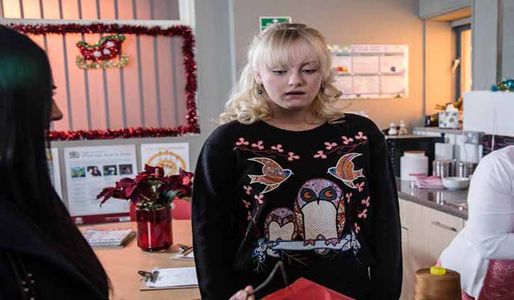