Callum calls at No.8 with some trendy clothes for Max. David throws them back in Callum’s face and orders him to leave but Max holds onto a cap. Wearing the cap from Callum, Max tries on his wedding suit, but throws a tantrum demanding the clothes from his “real dad”. David’s heart breaks. Meanwhile with Gail and Michael’s wedding approaching, Steph’s worried as Andy admits he’s grown fond of the family and feels like he belongs. So how will she react when she lets herself into Andy’s flat and is confronted by none other than the real Gavin Rodwell, back from his travels!

Faye’s struck down with a bad cold and fears her pregnancy is about to be discovered when Anna insists on taking her to see the doctor. Dr. Gaddas diagnoses Faye with a viral infection. Desperate to avoid further probing, Faye’s mortified when Anna mentions her weight worries and bolts out of the surgery. Will Anna realise there’s more to it? Meanwhile when Craig spots Anna hugging a tearful Faye, he assumes the truth is out. Will he blow her secret?

When Rita learns of Jenny’s sleepover at No.13 she admits to Sophie that she’s concerned Jenny might be after Kevin’s money. However keen to prove she has no ulterior motive, Jenny calls in the Kabin and offers Rita a cheque for £300 towards the money she gave her. How will Rita react to her olive branch?

Tony apologises to Tracy for not backing her in front of Liz and suggests they meet up later but Tracy keeps him dangling. When Liz then pops into Barlow’s Buys, Tracy takes great pleasure in barring her. How will Tony deal with the two women in his life?

A gobsmacked Steph stammers that she’s Andy’s girlfriend. As Gavin chats about his trip, Steph spots some of Andy’s Bistro payslips bearing Gavin’s name and stashes them in her pocket. Gavin explains how he lost his phone abroad so hasn’t had any messages. Unnerved, Steph makes her excuses and flees. Andy’s stunned when Steph informs him that Gavin has returned. Panicking that Gavin will find out how he’s been using his name and will kill him, Andy says he intends to tell Michael the truth. Steph advises him to face Gavin first.

Hearing that Katy’s meeting Linda in the pub, Owen decides to go along, keen to impress his daughters. Katy’s annoyed when Anna and Owen turn up in the pub, and decides to meet Linda somewhere else. Owen’s disappointed while Anna’s frustrated with him.

Sophie finds a tearful Rita in The Kabin, regretting her confrontation with Jenny. Sophie takes her for a drink to cheer her up.

Max refuses to take off the cap Callum gave him. Gail tries to explain to Max how David is a proper father to him, but Max insists David is horrible. When Michael suggests it might be worth letting him see Callum, David goes berserk but later admits that Michael was right and he can’t find any solution other than letting Callum see Max. Gail comforts a broken David. Tim and Sally speculate over Faye’s row with Craig. When Tim jokingly refers to him as her boyfriend, Faye goes mad. 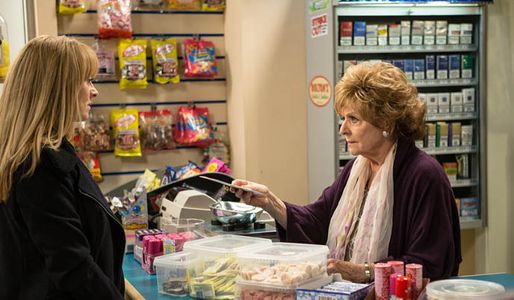