Coronation Street 02/08 - Nick's night with Kylie could be exposed

Nick's riled when he gets a letter summoning him to court for his weak spirits, but it's Leanne who's in for a real shock when she receives a letter asking if she knows where her husband was and who with on Christmas night! She decides to ask Nick for answers.

Elsewhere, Rob goes to pick up stock from the shop and his old friend pays Tracy a visit. He offers Tracy a load of cheap tablet computers and she falls for his spiel. When Rob comes back and hears about it, he panics. They're likely to be stolen and he's due to meet his parole officer. Can they get rid of them in time?

Also, Mandy hopes Jenna and Sophie will split because of their row over the racism complaint. But after Lloyd has a word, Jenna accepts Sophie's apology.

Nick knows this is his chance to tell Leanne the truth about what happened on Christmas night. Nick quietly tells Kylie about the letter, but when Leanne spots him talking to Eva she presumes she's the other woman.

Also, Lloyd and Mandy head out for a romantic meal at the bistro but they're soon arguing over Jenna's decision to take a job in the cafe. 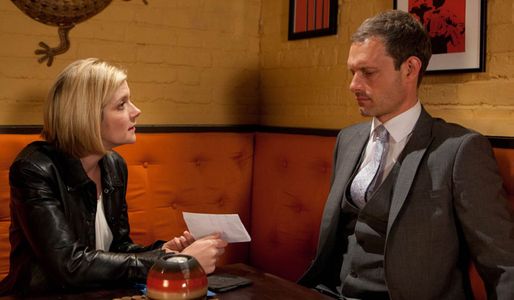