As Michelle busies herself planning Carla’s wedding, Steve moans that they’ve spent little time together since his return. He confides in Liz that Michelle seems to be avoiding him and Liz has to mask her concern. In the cab office Tim advises Steve that he should channel his inner caveman and show Michelle what she’s been missing. Liz confronts Michelle and demands to know if the reason she’s avoiding Steve is because of Will. How will she respond?

Nick attends his appointment with the consultant and admits he’s scared he might lash out at Carla like he did with Leanne. The consultant recommends an MRI scan but points out that given his brain injury, it’s impossible to give an exact diagnosis. Nick leaves, upset. Gail presents Carla with a photo album to welcome her to the family and Carla is touched. She tells Nick she’s never been happier and he forces himself to hide his anxiety.

As Sophie heads out of the café, she bumps into Kate and Caz coming in. Caz yelps, making out Sophie caught her injured ankle. Sophie’s incensed and confides in Kevin she never touched Caz’s ankle and she reckons she’s playing on her injury in an attempt to hang on to Kate.

In a bid to take his mind off Tony’s death, Phelan persuades Jason to accompany him to the County match.

Michelle admits to Liz that she kissed Will but then came to her senses and has been feeling guilty ever since. Liz assures Michelle she’s the best thing that’s ever happened to Steve and she mustn’t let a stupid kiss ruin their marriage. Tim gives Steve caveman lessons. Unimpressed, Sally tells Tim to stop embarrassing himself. Steve suggests to Michelle they have a quiet night in together but Michelle doesn’t appear to be very keen.

At Carla’s insistence, she and Nick try on their wedding rings. Nick’s overcome with emotion. In the Rovers, Gail fusses over Carla and explains how she didn’t initially welcome her to the family as she thought she was a murderess but now she’s changed her opinion. David drags Nick into the Rovers back yard to ask what the consultant said. Will Nick tell him the truth? Having returned home, Nick attempts to make a cup of tea but when he accidentally pours boiling water on his hand, he loses his temper and hurls the mug at the wall. Carla’s horrified.​

While Yasmeen chivvies Sharif in the kitchen, Zeedan and Alya set up the barbecue in the garden. Alya admits she’s invited Rana along. Mary, Cathy and Rana arrive for the barbecue. Having discovered that Rana’s a nurse, Mary quizzes her about her many ailments. As the heavens open, despondent Yasmeen ushers her guests inside while smug Sally waves to her from the comfort of her conservatory. Yasmeen fumes.

Sophie questions Caz about her accident. Caz is evasive leaving Sophie even more suspicious and she voices her suspicions about Caz’s accident to a defensive Kate. 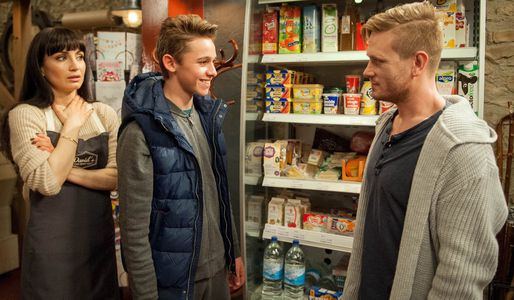