Nick and Leanne discuss baby names. Nick admits so long as the baby calls him Daddy that’s all that matters. Leanne calls in the pub and tears a strip off Liz, telling her that she and Steve have come to an agreement and it’s none of her business. Liz calls a truce and offeringSteve a hug, promises him the last thing she wants is to see he and Michelle split up. Steve’s relieved. As they prepare dinner, Nick confides in Leanne that his whole relationship with Carla was based on lies and he would never want to go through that again. Realising it’s time for complete honesty, Leanne steals herself and admits that her baby’s father is Steve McDonald!

Beth, Chesney, Kirk and Sinead make a fuss of Craig as he opens his 18th birthday presents. Tim takes Craig to the Rovers for his first legal pint. Beth throws a birthday party at No.5 for Craig. As Craig opens his cards, he comes across a letter from the police and his face falls. He reveals his application has been refused on the grounds he failed to declare a relative’s criminal conviction.

Aidan puts pressure on Johnny to resolve the situation with the factory girls and reveal who grassed them up but Johnny refuses. Having called a strike, the girls assemble outside. While Aidan tries to negotiate with them, Jenny slips inside. Alone in the factory, Jenny and Johnny kiss passionately. When Aidan offers the girls cakes and double time, they crack and agree to go back to work. As the girls troop in will they catch Johnny and Jenny in the act?

Leanne assures Nick that sleeping with Steve was a one off and a huge mistake which she deeply regrets. Nick struggles to take in the news. When Leanne admits she slept with Steve the night that Nick confessed his love for her, Nick’s furious. Leanne assures him Steve wants nothing to do with the baby. Nick’s not convinced, pointing out Steve could change his mind at any time. Leanne begs Nick to give her another chance, promising him that they can still be a family. But is this a bridge too far for an angry Nick?

With all eyes on her, Beth reveals that Craig’s dad has been in and out of prison all his life. Craig’s shocked. Beth admits to Craig she concealed the truth about his dad from him as it was she who shopped him to the police after his first offence and since then he’s spent most of his life behind bars. Craig’s devastated. Calling Beth a selfish liar, Craig storms out. Hoping for some sympathy, Beth looks to Kirk but she’s devastated when he tells her Craig’s right. Tim andFaye find Craig about to deface the chippy with an aerosol. Tim persuades Craig to come home with them.

Lauren threatens Bethany in the school corridor but quickly retreats when the Head Teacher approaches. The Head asks Bethany to come with her.Bethany’s taken aback to find Gary in the Head’s office. Gary tells the Head that Lauren is a bully who’s been making Bethany’s life hell and they need to do something about it. As Gary dropsBethany at home, makings her promise to let him know if she receives any more abusive texts,Bethany’s touched by his kindness.

Sean and Izzy lay into Jenny, angry that she’s been having a fling with the boss and telling tales about her work mates. Johnny’s hurt when he overhears Kate, Aidan and Sean discussing his relationship with Jenny and suggesting she’s only after his money.​​​​​​ 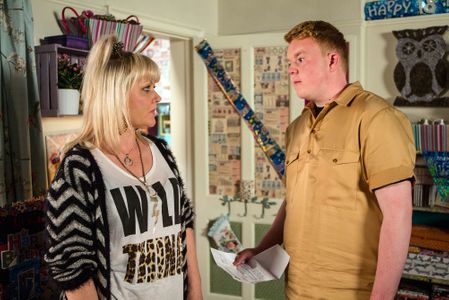