In a bid to try and sort out her sister’s love life Leanne secretly replies to a text from ‘Fred’ on Toyah’s phone inviting him round to the flat. Leanne opens the door and is bemused to find Peter there. Will Leanne put two and two together? Secretly planning to propose to Leanne, Nick asks her to meet him at the bistro to discuss the staff rota.

​When Jenny shows Alya and Kate some prototype mastectomy bras she’s made, Alya warns her she should run the idea by Johnny first. But will Jenny listen to Alya’s advice? Impressed with Jenny’s efforts, Sally suggests she’ll bring in some fellow cancer patients for their opinion on the new bras.
​

David is unnerved when Anna asks him to call in the café after work as she needs a chat. But Anna is shocked when she learns something from Tim.

After another night on the sofa, Chesney puts on a brave face despite he and Sinead going through a rocky patch. Hoping to impress Sinead, Chesney calls in the salon and instructs David to give him a cool haircut.​

Eva finds Nick waiting alone in the bistro for Leanne. When Nick reveals his proposal plans, Eva’s thrilled. But with the secret out about Toyah and Peter, has Leanne done a disappearing act?

Tyrone lays the law down to Kevin and tells him that in order to turn the business around they need to reduce the workforce and sack Sophie. Kevin’s stunned.

Whilst Jenny shows off her mastectomy bras, Johnny arrives with a client in tow. He’s furious to find the girls standing about chatting and rails at Jenny. Taking charge, Jenny shows her designs to Johnny’s client and explains it’s a niche range for an untapped market. How will both the client and Johnny react to this?

Clocking Sinead’s miserable expression, Daniel drags her for a drink. Sinead pours her heart out to Daniel, telling him about her doomed relationship with Chesney. ​​​ 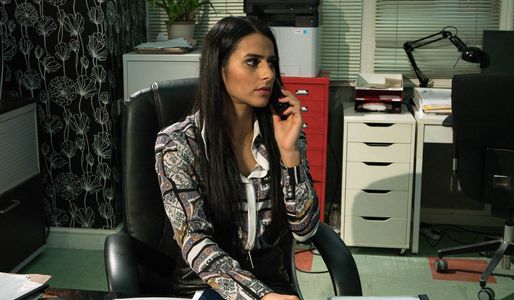