Fiz tells Chesney he was wrong to sell Sinead’s belongings and she thought better of him. Feeling guilty about the brooch (a family heirloom), Chesney hands Sinead a hotel voucher he’d bought for the two of them by way of a peace offering. Using Johnny’s computer, Sinead goes online to book the hotel for she and Daniel. But as she studies the booking calendar, she realises with horror she’s muddled up her dates. Sinead hurries out of the factory, clearly worried. Taking Beth to one side, Sinead drops the bombshell that she’s pregnant.

When Adam tells Ken he’s passed his exams and only has one more to go, Ken’s unimpressed, pointing out he’s a cheat and passed fraudulently. Ken confides in Rita how he’s concerned for Daniel after finding him fighting in the street over a woman. Meanwhile Tracy persuades Adam to help out in the flower shop. Can he use it to his advantage?

As Sally prepares for another day’s protesting with Rita, Yasmeen and Erica, the foreman at the building site urges Gary to have a word. Sarah quizzes Bethany about her evening with Nathan but she’s evasive. With Bethany out of the way, Sarah takes her phone and finds Nathan’s number.

Beth advises Sinead to keep her pregnancy a secret for now while she considers her options. Ken laments to Brian how he reckons Sinead is a bad influence on Daniel. Brian warns him not to get involved or he could finish up losing his son. Daniel’s horrified when he stumbles across Sinead’s pregnancy testing kit. Daniel confronts Sinead with the pregnancy test.

As they busy themselves with a huge flower order, Adam compliments Mary on her floristry skills and she basks in his flattery. Adam offers to deliver the flower order and Tracy hands him Ken’s car keys. Adam pulls up in front of (drug dealer) Ronan Truman’s house.

Rita, Yasmeen, Erica, Rana and Brian join Sally in her protest outside the building site. When Gary suggests they give up, Rita’s incensed and chains herself to the railings with Brian’s bicycle lock. Having had an implant, Bethany feels very grown up, believing she’s got a proper boyfriend. But Bethany’s mortified when Sarah confesses that she left a message on Nathan’s phone inviting him round for tea.​​​​​ 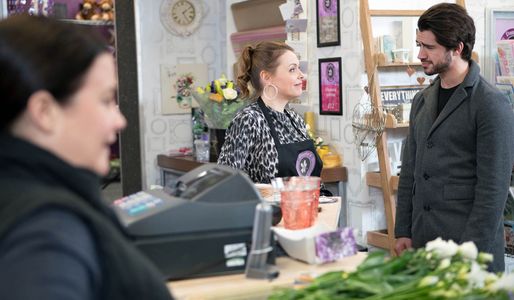