Faye’s scared witless as she goes into labour. Craig’s desperate to call an ambulance but Faye bans him from doing so. As Sally and Tim sit with Anna and Owen in the Rovers, a frightened Faye realises she’s out of her depth and screams at Craig to find her Mum. Craig searches in vain for Anna. Finding the flat door open, Sophie makes her way up the stairs. Sophie’s horrified to find Faye on all fours and clearly in pain. As Owen and Anna head home, Craig approaches and clearly distressed, drags them to the corner shop flat. Owen and Anna are shocked to the core to find Faye giving birth. Sophie assures them she’s called an ambulance.

Callum pulls up next to Bethany and Sarah orders her into the car. They speed away leaving the angry shop assistant empty-handed. Sarah tears a strip off Bethany for shoplifting but Bethany remains unfazed. Dropping them back at No.8, Callum invites Sarah out for a drink. Furious to see Callum chatting up his sister, David warns Sarah to stay away from Callum. But will Sarah heed his warning?

Carla tries to thrash out a business deal with Mr Hanlon in the bistro. However when Mr Hanlon complains about his food and admits he’s just trying to get a freebie, Carla tells him to stick his deal and stalks out. But Carla’s taken aback when she gets a call from Mr Hanlon to tell her how impressed he is by her no nonsense approach. Has she got herself a deal?

Tracy bluffs to Tony telling him how well her meeting went with the new supplier. Tony’s sceptical and accusing Tracy of making the whole thing up, tells her she’s right, it’s over between them. Tracy’s speechless.

Faye’s scared and wracked with pain. Anna does her best to take control and assures Faye she loves her no matter what. Owen breaks the news to a gobsmacked Tim and Sally that Faye is having a baby. As Anna, Sophie and Sally fuss round exhausted Faye, Tim tries to reassure her. With Faye in the ambulance, Anna turns on Craig, but Faye reveals she swore Craig to secrecy and tells Anna to leave him alone. Upset Craig heads home where he tells Beth and Kirk about Faye, insisting that the baby isn’t his. At the hospital Anna berates herself for failing to realise that Faye was pregnant. As Faye gives birth to a baby girl, how will the terrified teen cope?

Bethany mischievously tells Jason how Sarah still harbours feelings for him. Meanwhile Callum begs a flirty Sarah to let him take her out again. As David angrily points out to Sarah that Callum is only using her to get at him, how will Sarah respond?

When Carla has problems with her laptop, she asks Nick over to the flat to sort it out. Nick proves hopeless at fixing Carla’s laptop but they share a bottle of wine and enjoy each other’s company.

Disappointed to find Liz asleep on the sofa, Tony phones Tracy with a grovelling apology. Tracy’s thrilled to realise he’s still well and truly hooked. Dressed sexily, Tracy opens the door to Tony. Will she take him back with open arms? 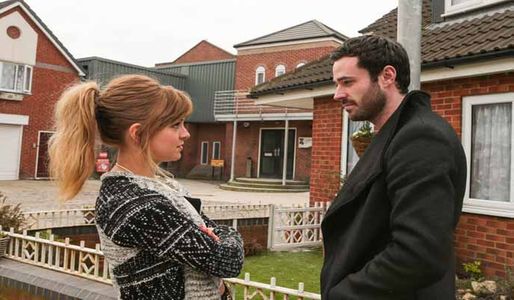