Michael’s touched when Gail calls at his bedsit and gives him a shirt for his first day at work but when Nick and David later arrive, he’s left shaken when Nick menacingly tells him to stay away. When Gail calls at Street Cars, she’s shocked to find that Michael never turned up. Will Michael be too scared to tell Gail the truth?

Audrey’s shocked when Nick humiliates Leanne in front of her. At the Bistro, customers are forced to leave when the tension between the duo reaches boiling point. How much more of Nick’s vile behaviour can Leanne take?

Carla’s grateful when Sally offers to help out in the office and the factory girls are relieved when Carla announces she’s just secured a large order.
​
Elsewhere Steve is convinced he’s going to fail his exam and Lloyd is concerned when Andrea remains evasive when he asks her to see him off on his holiday. 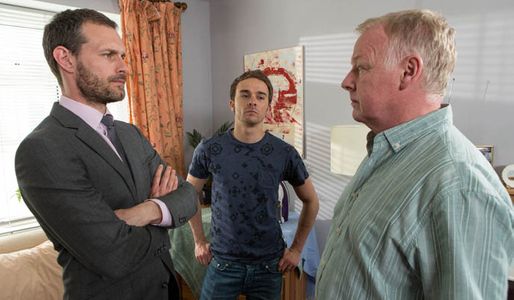 Coronation Street 28/07 – Nick has the day from hell