David agrees to go along to a grief counselling session to appease Gail but refuses to speak to the counsellor when he gets there. Determined to keep Gail quiet he tells her the session was a great help. When David notices an update on Macca’s social media page that tells him the Dog and Gun are having a party for Clayton’s birthday in his absence,an angry David storms down there determined to find Macca but before he can reach the pub he’s grabbed by a menacing figure...but who is it?

Eileen talks through the different flat options with Rita who is planning on buying one for Jenny and Sally is eaten up with jealousy. Keen to commit to her new roleEileen resigns from Street Cars, much to Steve and Tim’s horror. But when Vinny later demands to know why Eileen has spent a large sum of money from the business account on porcelain tiles, willEileen begin to think she’s bitten off more than she can chew?

Andy shares his latest story with Steph and hopes she’ll sing his praises. But when Steph is horrified by his fictional tastes, Andy is left fuming and feels unsupported.

Michelle tells Steve that her new wedding client is Tommy Orpington, a County football player and an overexcited Steve lets slip the news to Tim. Rita’s tempted when Freddie suggests they go along to the closing party together of their old stomping ground, the Zambezi Club. ElsewhereLeanne reassures Eva that Nick is the father of her baby, but is Eva convinced?

David is viciously attacked by the menacing figure at theDog and Gun and his family are horrified by the bloodied and bruised state he returns home in.When he reveals to Nick that he went to the Dog and Gun in an attempt to exact revenge on Macca,Nick is incensed and implores David to let the courts deal with Macca and Clayton. But when David later logs into a computer with only revenge on his mind, what plan is he now hoping to put into motion?

Phelan takes a raging Vinny to the pub to try and calm him down over Eileen’s extravagant tile splurge and reminds him that they’ll have the last laugh whenEileen’s left penniless. In a bid to put the argument behind them, Eileen asks Vinny to stay for tea.But when she reveals that she’s left Streetcars so she can spend more time on the building project, Vinny is even more furious.

Audrey is eaten up with jealousy when she sees a dressed up Rita heading off to the Zambezi Club party with Freddie. But when she sees them return to the Street later, Audrey decides to mark her territory...

Leanne offers Steph the manager’s job whilst she’s on maternity leave and Steph is delighted to realise Andy was behind the idea. Elsewhere Michelle is embarrassed when she findsSteve, Tim and Tyrone fawning over her new wedding client Tommy Orpington.​​​​​​​ 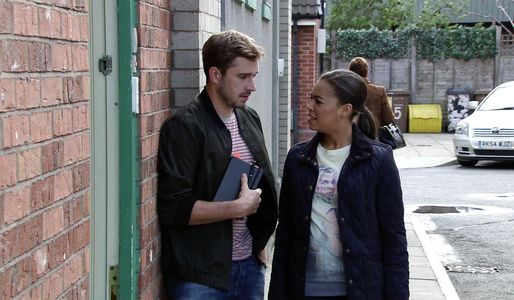