Tracy watches ruefully as Carla and Michelle head off for their spa day. When Ken then hands her a set of keys which Emily found in one of Rob’s jackets, Tracy realises they’re the keys to the factory and forms a plan. Using Rob’s keys she lets herself into Underworld and in a rage trashes Carla’s office. When a stunned Carla walks in the two women fight, Carla threatening to call the police. But when Tracy breaks down and tells her how much she loves Rob will Carla relent? Can the pair sort out their differences and move on?

When Kevin buys a posh second hand sofa but fails to get it through the door of No.13, Tim offers to take the sofa off his hands, thinking it will impress Sally. However Sally hates the sofa and demands Kevin swaps back again. Kevin refuses and Sally’s furious. But when she discovers how expensive the sofa is, will Sally have a change of heart?

Having been left to lock up, Alya invites Gary into the factory hoping for some time alone, however they’re disturbed when they hear somebody enter (Tracy) and in a panic, Alya bundles Gary into the loading bay.

When a client in the gym has an accident and crushes his hand, will Katy the wannabe paramedic come to his rescue? When the police tell Todd they’ve caught the guy who assaulted him Todd’s unfazed, pointing out that it won’t help the scar on his face. 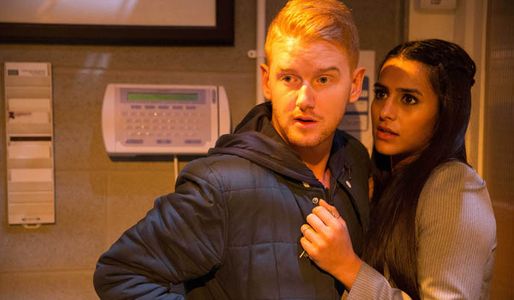