Johnny helps an upbeat Jenny move her things into his flat. Adam confides in Peter that Aidan tried to threaten him. When Aidan invites Alya round to the flat to talk business, Jenny assumes they’re arranging a lovers’ tryst. Jenny, playing the concerned friend, tells Eva that Aidan is having an affair with Alya and she’ll find them at the flat now. Eva barges into the flat all guns blazing but she’s mortified to find a perfectly innocent business meeting taking place. Aidan tears a strip off Jenny for trying to split up he and Eva but they’re interrupted by a visit from the police telling Aidan they’ve had a complaint about his threatening behaviour towards Adam Barlow and Johnny despairs. Furious Johnny delivers both Aidan and Jenny a devastating blow each - but what?

At Amy’s suggestion, Steve and Liz plan a baby shower for Michelle and having run the idea by Simon, Eva decides to organise a surprise party for Leanne too. As the Barlows gather for Daniel’s birthday dinner at No.1, Peter receives a text from his girlfriend and, making excuses, heads out leaving Simon unimpressed. As Peter meets his lady secretly in the flower shop flat they kiss passionately. Will Simon cover for him?

When Cathy assures Roy she’d rather have him in her life as a friend than lose him altogether, can she cause Roy to have second thoughts about moving?

A bedraggled Billy explains to Todd how he spent the night in a bus shelter with Shona as all the hostels were full but will it be enough to coax the Grimshaws into letting Shona stay? Meanwhile Steph’s friend Peggy calls in the bistro and is instantly smitten with Robert.​​​ 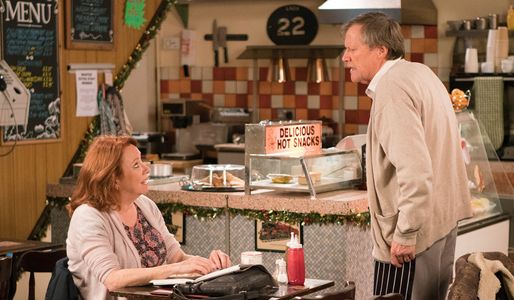