Steph accompanies Andy to his flat. Their hearts race when Gavin immediately produces a rogue Bistro payslip plus the letter Michael wrote him. Gavin’s incredulous that Andy’s used his name to get a job and ingratiate himself with Michael. Andy splutters that Michael’s a decent man with a heart condition, but bitter Gavin has no kind words for the father who abandoned him. Andy’s scared stiff that Gavin will blow his cover. Steph urges him to come clean to Michael straight away. Steph and Andy find Gail and Michael in the Rovers but before they can say anything, Gavin walks in. Is he about to blow Andy’s secret?

Faye dreads a parents’ meeting about a school trip. When Anna and Owen arrive they sit with a couple and their son, Jackson. Faye’s alarmed to see him, makes an excuse and flees the room, leaving Anna and Owen increasingly confused by Faye’s behaviour. Meanwhile Anna’s unimpressed when Owen invites Linda and Katy up to the flat to look at old photos.

Michelle and Liz agree that Eileen is ill suited to bar work but are wary of firing her. Michelle steels herself to sack Eileen but loses her nerve.

Roy and Sharif compete for an allotment plot. Callum’s surprised when David arranges for him to see Max but when Callum arrives David reveals that Max is out. What is David playing at? 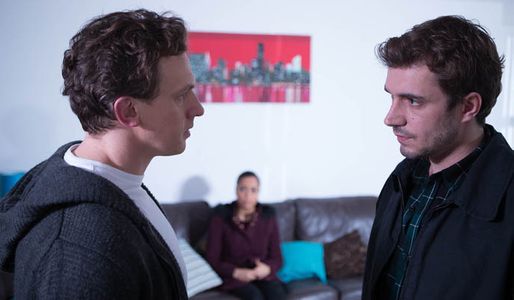