David’s furious to find Callum at no.8 having been getting it on with Sarah. As David turns on Sarah, Callum enjoys winding David up. Shaking with rage, David orders Callum out of the house. Nick does his best to calm David down, pointing out it’s Max’s hearing in 2 weeks’ time and he has to get a grip. But David’s desperate and clutching their passports, David bundles Max and Lily into a cab. What is he up to?

Billy calls at No.11 and angrily shows Sean the Gazette article about their run in with the pub landlord.Sean’s mortified and explains how Julie contacted the paper with their story. Worried for his career, Billy tells Sean he’s got a meeting with the Bishop who has very conservative views on homosexuality. Sean feels terrible.

When Todd asks for credit in the corner shop, Mary overrules Julie and refuses him. Keen to get his own back, Todd reports Mary’s motorhome to the council, claiming it’s a hazard.

Despondent Carla tells Michelle that her relationship with Nick is over before it began as his old flame Erica is back. Eileen’s thrilled to receive another message from Jeff, flattered that he’s so persistent. Todd smiles to himself. Steve is taken aback to find a dog in the back of his cab.

Nick and Sarah are worried to discover David’s done a runner with Max and Lily and taken their passports. As David checks into an airport hotel he phones Nick, assuring him they’re fine and not to worry. Nick’s beside himself realising David’s abducted Max two weeks before the custody hearing. Having discovered David’s done a runner with Max,Callum’s livid and grabbing Nick’s mobile, phones him. Callum tells David he’s got until the morning to bring Max home or he’ll finish him once and for all. Is there any going back for David?

A council officer inspects Mary’s motorhome and reveals that one of the neighbours has made a complaint about it. Mary’s horrified. Convinced that Julie’s never liked her, Mary accuses her of reporting her to the council. Julie’s hurt and denies all knowledge. As Norris does his best to calm Mary down, will Todd feel a pang of guilt?

Having returned from his meeting, Billy’s upset as he explains to Sean that the Bishop made his disapproval plain and in desperation Billy lied to him, assuring him that he and Sean have ended their relationship. How will Sean react to this?

Liz and Michelle are taken aback to find Steve’s brought a dog home. Making out he’s had a threatening call from the loan shark, Tony puts pressure on Steve and Michelle to find a buyer for their half of the pub. 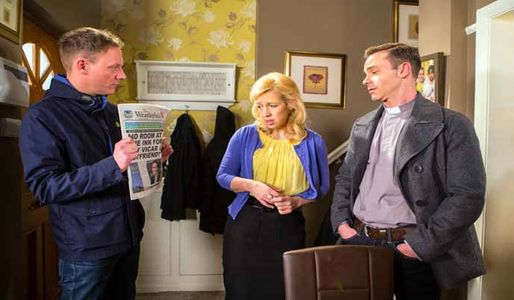