Having quit her job at the Bistro, Leanne’s feeling nervous when Kal suggests he brings his family round to hers. His son fails to show up but Leanne manages to make a good impression on his mother, Yasmeen. But as the family make to leave, Nick approaches and tells the family that Leanne used to work as a prostitute. How will Yasmeen take the news?

When Nick lets slip that he knows Michael’s address, Gail becomes suspicious and calls at Michael’s bedsit, demanding to know the real reason he didn’t turn up for work. When he admits that Nick and David threatened him, how will Gail react?

Luke flirts with an oblivious Carla when she drops her car off at the garage. He later insists on walking her to her flat as a jealous Peter watches.
​
Elsewhere, Kylie’s at the end of her tether when Max plays up, Steve shows Michelle the retro camper van he’s bought for their new business venture and Andrea’s husband Neil tells her he’s postponed his return to Nigeria so they can spend more time together and suggests they visit their daughter Jessica in Liverpool. 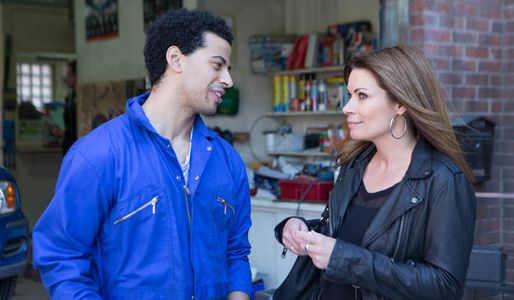