With the aid of an online video, Steve sets about tiling the ladies’ loos. But when his hard work fails to pay off Liz is forced to enlist Tony’s help. Liz makes it clear to Tony he’s only here to fix the tiles and then she wants him gone. Tony tells Liz how sorry he is for all the pain he’s caused and begs her to give him another chance. Will Tony break down Liz’s defences? Meanwhile Steve is upset that Liz has allowed Tony to do the tiling and when he spots her giving him a pint and chatting away like nothing’s happened he’s further angered.

Izzy’s furious with Alya, pointing out Gary’s disappeared, Jake’s missing his Dad and it’s all her fault. Alya arrives home upset and announces to Yasmeen and Sharif that she’s moving out as she knows what a disappointment she is to them. Yasmeen begs her not to go but will Sharif be able to offer Alya the assurances she so badly needs? Meanwhile Anna calls at the Nazirs and angrily reveals that Gary has gone to stay with his Dad in Hamburg and Alya has ruined his life.

Making out she was just passing, Nessa joins Ken, Rita and Audrey in the Rovers. When Nessa hears that Audrey’s short-staffed, she offers up her services explaining that she’s a trained stylist.

When Mary reveals that she and Brendan plan to spend bonfire night on a ghost walk at a nearby stately home, Norris is scathing. Sophie’s thrilled when Kevin presents her with a 21% share of the garage for her 21st birthday. 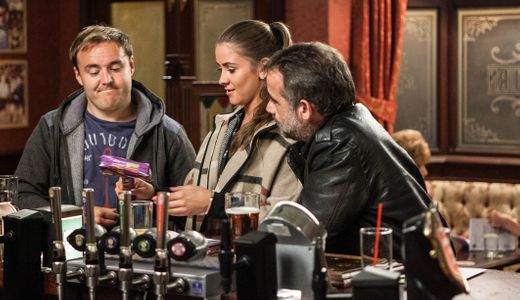 Coronation Street 11/05 - A mystery buyer swoops into the Rovers